How Your Company Can Benefit From News Media Shift Online 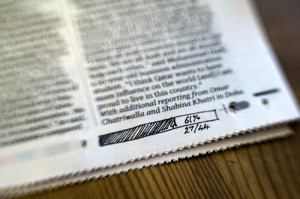 We’ve talked about disruptive innovation on this blog, and how print media going digital is shaping the industry and affecting news reporters in particular. With two newly released reports providing data on the shifting trends in print journalism, let’s look from a PR/newsblogging angle at how your company or brand might benefit.

A recent article, “How shifting newspaper circ numbers affect PR pros,” by communications expert Gil Rudawsky points out five distinct trends based on the semiannual newspaper FAS-FAX and Audience-FAX report released Oct. 30 by the Alliance for Audited Media, formerly known as the Audit Bureau of Circulations. The agency’s report provides circulation data for its newspaper members for the six months ending on Sept. 30, 2012, and includes both print and digital data.

And, illustrating that “digital first” and paywalls do work, the top five of the 25 U.S. daily newspapers with digital editions are: The New York Times, The Wall Street Journal, New York Post, Denver Post, and Los Angeles Times.

With these numbers in mind, Rudawsky concludes that “Fewer people are reading actual newspapers, but the dwindling numbers continue to be offset by the growing market of digital subscribers.” The shift, he writes, means this to a PR pro:

“The story behind the numbers is that paywalls aren’t just a passing fad, but a possible way to save news outlets that continue to buy ink by the barrel, he says, “Although it’s still unclear whether the digital subscribers will rescue the industry.”

Alyshia Kisor-Madlem, in her Nov. 13 article on PR Daily, quotes Pew Research Center’s biennial news consumption survey results, offering her own conclusions on what the shift to online media means to the PR industry (and the client).

Pew’s report, released on Sept. 27, 2012, highlights trends in the U.S. news consumption from 1991 to 2012, noting that “transformation of the nation’s news landscape has already taken a heavy toll on print news sources, particularly print newspapers. […] Online and digital news consumption, meanwhile, continues to increase, with many more people now getting news on cell phones, tablets or other mobile platforms.” 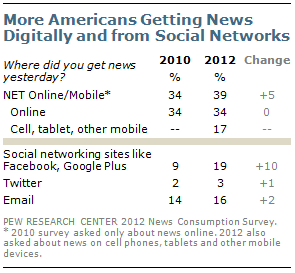 The report’s numbers are telling:

The percentage of Americans saying they saw news or news headlines on a social networking site yesterday has doubled — from 9% to 19% — since 2010. Among adults younger than age 30, as many saw news on a social networking site the previous day (33%) as saw any television news (34%), with just 13% having read a newspaper either in print or digital form.
The proportion of Americans who read news on a printed page — in newspapers and magazines — continues to decline, even as online readership has offset some of these losses. Just 23% say they read a print newspaper yesterday, down only slightly since 2010 (26%), but off by about half since 2000 (47%).
While Americans enjoy reading as much as ever — 51% say they enjoy reading a lot, little changed over the past two decades — a declining proportion gets news or reads other material on paper on a typical day. […]
Over the past decade, the percentage reading a print newspaper has fallen by 18 points (from 41% to 23%). Somewhat more (38%) say they regularly read a daily newspaper, although this percentage also has declined, from 54% in 2004. […] 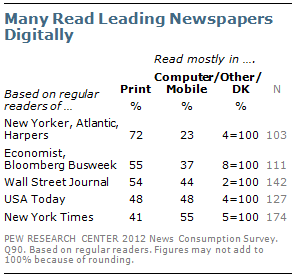 So, based on the data, Kisor-Madlem outlines seven ways a company or a brand can benefit from using online media vs. print:

The numbers paint a pretty clear picture that the print media can successfully go digital — partially or all the way — and other businesses and brands can follow and take advantage of the changing landscape.