Save The Times-Picayune: New Orleans Fights Back 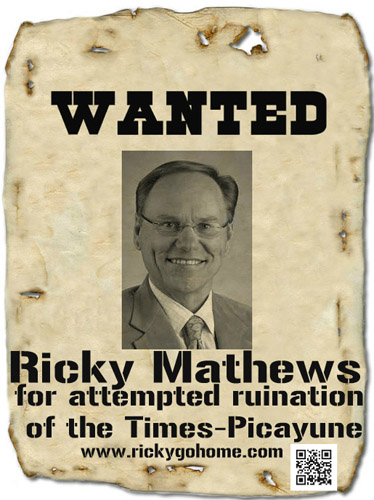 As the news broke a couple of weeks ago, we wrote about how the New Orleans daily, The Times-Picayune (TP), will start publishing three times a week, with reduced staff and under the new management of NOLA Media Group.

Yesterday, the TP employees had their individual meetings with the new management to learn their fate (the newsroom alone, apparently, had  endured a 49% cut), while the people of New Orleans, including a slew of high-profile citizens, are fighting to keep their paper published every day.

As Gambit‘s Kevin Allman, who has been following the story, has reported, the June 4 “Save the Picayune” rally, featuring a prominent musician Allen Toussaint, drew several hundred of supporters. There are also a “Save the Times-Picayune!” petition on Change.org; “Save the Picayune” page on Facebook (with 3,304 “Likes” to date), a website solely dedicated to unwelcoming the TP’s new publisher, Ricky Mathews; and, of course, a T-shirt (“The Some-Times Picayune” by Dirty Coast).

The Ricky Go Home! site urges Mathews to “print the Times-Picayune every day or sell it to someone who will,” noting this:

If you want details about Ricky Mathews’ life and times, it’s easy enough to find. Born in Alabama. Worked at newspapers in Alabama and Mississippi. But the most important thing about Ricky Mathews from a New Orleans’ perspective is that he has the gall to move to town and dismantle our newspaper. Even Hurricane Katrina couldn’t do that.
Ricky Mathews doesn’t know us. He doesn’t know our city. Yet he is attempting to dismantle a lifeline and a common thread. Ricky, please go home.

The site’s “Rogues Gallery” features the “wanted” poster of Mathews (also pictured here) in the fine company of some of the city’s least favorite entities: the NFL’s Roger Goodell, Michael Brown (formerly of FEMA), the Atlanta Falcons, a mosquito; and commander of British forces during the Battle of New Orleans, Edward Pakenham.

Most notably, in response to the TP changes, the city’s many prominent civic and business leaders have formed the Times-Picayune Citizens’ Group. Micheline Maynard notes in her article for Forbes that “Although Newhouse has said the paper is not for sale, and Advance Publications is privately held, the Citizens Group said it is ‘reviewing all options and opportunities to influence the current plans.”’

Harry Shearer, who calls himself a New Orleanian “by adoption,” also penned an article for the Columbia Journalism Review, under the subhead, “Want to damage New Orleans (again)? Decimate its newspaper.” Shearer writes:

The Times-Picayune is not Starbucks or Rite-Aid or Winn-Dixie sitting on the sidelines waiting for the recovery. It is the paper people in New Orleans love, or love to hate. You’ve probably read the relevant stats: the TP enjoys the highest rate of print penetration of all dailies in the 50 biggest metro areas.
And 36 percent of New Orleanians are not connected to the Internet. Consider also that nola.com, the website to which Advance Publications now assumes people seeking news in the city will drift, is widely recognized as one of the ugliest and worst-designed such sites…

Ray Brandt Automotive Group, Hurwitz Mintz Furniture Co., Robert Fresh Market and Lakeview Grocery and others on Monday added their names to more than 70 business and civic leaders who are already listed as opposing the plan, according to a statement issued by the regional economic development group GNO Inc. […]
Ray Brandt, whose company Ray Brandt Automotive Group operates several car dealerships in the metro area, says his opposition to the change is for both sentimental and pragmatic reasons. As a resident, he’s ‘disappointed’ that his daily paper will disappear. But as a businessman, he worries that the new publishing model will hurt his operations. The new publishing schedule eliminates Saturday, the biggest day for Brandt’s businesses, he said.

Well, there you have it. While it’s doubtful that Ricky Mathews will go home after all, but the local pushback has been amazing — truly in the spirit of New Orleans — and we haven’t seen the last of it.

Image by Ricky Go Home!, used under Fair Use: Reporting.