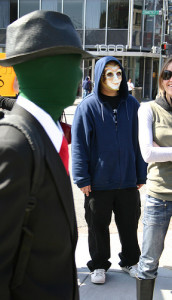 In Indiana, Marion County Superior Court Judge Scherry Reid has ruled that The Indianapolis Star and the Indiana Business Journal must release identifying information for readers who posted anonymous comments in the sites’ online forums. The two separate rulings are part of a defamation lawsuit by Jeffrey Miller, former chief executive of Junior Achievement of Central Indiana.

This is the first time in Indiana that the courts have ordered a news outlet to turn over identifying information about its online commenters, but there are precedents elsewhere in the country. Last June, in an ongoing defamation lawsuit brought by Donald and Janet Maxon, a judge ordered The Times in Ottawa, Illinois, to hand over information about an anonymous, alleged defamer.

The Indiana Business Journal has turned over the requested information while The Indianapolis Star has, so far, refused. Dennis Ryerson, editor and vice president of The Indianapolis Star, said, “We’ve long had a practice of protecting sources at all levels,” he said. “We now are reviewing our legal options.” Per Judge Reid’s ruling, however, the Indiana journalism shield law that protects reporters’ sources does not apply to commenters on the newspapers’ sites, nor does the First Amendment.

Free speech advocates worry that Judge Reid’s ruling and similar legal decisions could have a chilling effect on online discussions. David Hudson of the First Amendment Center in Nashville, Tennessee, said, “If this happens, then people will be less likely to comment.”

Others believe that anonymous comments are the bane of online news, since hiding behind a pseudonym allows people to write things that they wouldn’t under different circumstances. A recent example of this is the distasteful reader comments on news stories about the attack on CBS correspondent Lara Logan in Egypt during her coverage of the protests. In various outlets, countless individuals commented that Logan deserved the beating and sexual assault because of her appearance — both because she was a blonde Caucasian woman and because she is, by most standards, physically attractive.

Industry commentator James Rainey writes in his “On the Media” column for the Los Angeles Times,

It seems long past time for reputable news sites to clamp down on the gutter talk. Otherwise the open-door policy at npr.org, latimes.com and many other sites drives down the quality of the conversation and alienates the kind of thoughtful guests that make the party worth coming to in the first place.
Why not even require online guests to post comments under their real names — as newspapers have required letter writers to do for decades?
The conversation underscores the wild pendulum swings roiling most big media outlets. Not so long ago, readers had very few opportunities to have their say but the birth of blogging and social media sites like Facebook unleashed a pent-up demand by the masses to be loud and proud.

In the past couple of years, news sites have been experimenting with blocking user comments altogether and various forms of comment moderation. A recent release from Facebook could make that job a little easier. The social networking site has offered a third-party comments plugin for over a year, but released an updated system, the Comments Box plugin, through an official announcement on its Developer Blog last week.

Features of the plugin include comment moderation tools such as visibility tiers, blacklisting words, and banning users. There is also built-in moderation by fellow users, wherein comments will rise or drop in the list based on the number of likes, and users can help mark comments as spam or abusive.

More importantly, the tie-in with Facebook means readers will have to use their real names when commenting on a new story. (Fake names aren’t allowed on Facebook per the Terms of Service, although this rule isn’t always strictly enforced.) Mark Glaser, Executive Editor of PBS’ MediaShift blog, interviewed Justin Osofsky, Director of Platform Partnerships at Facebook, about the new plugin. Glaser asked if it will “lead to more civilized discourse” since comments will use their real names.

From a social media perspective, the Comments Box plugin is a boon to news organizations as well. A reader’s comments will show up on his or her Facebook News Feed in addition to the originating site. Followup responses from friends will show on both sites as well, even if they’re written on Facebook. Of course, this adds another log to the fire of online privacy discussions. A person’s privacy settings on Facebook will carry over to the Comments Box plugin, however.