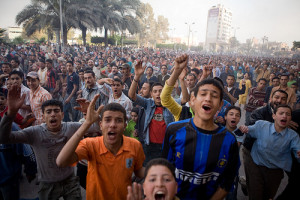 Major protests and riots in Egypt began a week ago today. Undoubtedly inspired by the recent uprisings in Tunisia, the current state of dissention has been a long while in the making. We have been covering the growing unrest in Egypt on the SixEstate blog for a few months now, along with the fact that the country’s social media movement is one of the largest in the Arab world. Social media — Facebook and Twitter in particular — is being credited with aiding protest organization efforts within Egypt.

A specific chain of events got the country to its current point, beginning with the June 2010 beating death of Khaled Said through the December 2010 bombings in Alexandria. PBS’s “Need to Know” blog points to WikiLeaks’ release of documents in December as potential fuel to the fire as well. Robyn Creswell, a doctoral candidate in Arabic literature at New York University, writes:

A cache of diplomatic cables relating to the Middle East was published in early December by the independent newspaper Al-Akhbar, and the leaks have been intensively discussed by Arab bloggers and political activists. Few subjects anger Egyptians more than their regime’s cooperation with Israel, and several leaked documents suggest just how closely the two countries’ diplomats and security forces work together. The cable sent in June 2009 from the U.S. embassy in Tel Aviv, which reveals that Egyptian officials were consulted about Israeli air and land assaults on Gaza the previous winter, must have been especially galling.

The Egyptian government is attempting to stifle communications within the country as well as outgoing communication, including shutting down Internet and mobile phone networks on January 27. The telecommunications blackout meant many were forced to revert to older technology such as ham radio, and landlines to utilize fax machines and dial-up modems. BBC News reports:

Long lists of international numbers that connect to dial-up modems are circulating in Egypt[…] ISPs in France, the US, Sweden, Spain and many other nations have set up pools of modems that will accept international calls to get information to and from protesters. Many have waived fees to make it easier for people to connect.

“By blocking the Internet and by attacking and arresting Egyptian and foreign journalists, the Egyptian government is trying both to prevent the protests from being organized and to prevent them from being covered internationally,” said Reporters Without Borders secretary-general Jean-François Julliard. Reporters Without Borders included Egypt on its Enemies of the Internet list as one of the worst violators of freedom of expression online.

Protesters are circulating a list entitled “20 Ways to Circumvent the Egyptian Governments’ Internet Block“. The most determined are still finding a way to access the Internet, including Twitter. (Hashtags include hashtags #egypt and #jan25.) On The Two-Way blog, Andy Carvin, NPR’s senior strategist for social media, compiled a list of some of the top Twitter accounts with coverage of the protests. Carvin’s list includes columnist Mona Eltahawy (@monaeltahawy) and Al Jazeera correspondent Dima Khatib (@Dima_Khatib). Nick Baumann, who covers national politics and civil liberties issues for Mother Jones‘ D.C. bureau, compiled another list of online resources for following the story.

The Associated Press has been actively soliciting citizen reports and photography on its Facebook page. The news organization is encouraging citizen journalism from anyone with “some degree of Internet access” to upload files directly to the AP via its YouSendIt page. On a recent Facebook update from the AP, a person whom I won’t name offered the following advice for Egyptians:

One can’t help but wonder if a revolution of this size would have been possible before the advent of the Internet. Not only does the medium allow the spread of information to occur more quickly, but it’s also been an equalizer across class in Egypt, allowing for the organization of previous protests.

Still, Allyson Kapin writes on the Frogloop blog, “Social media certainly has its role as a communications and organizing tool to help spread information fast, but it also comes with consequences, particularly in countries where there is major political unrest.” Kapin quotes a recent New York Times article about a book by Evgeny Morozov called The Net Delusion: The Dark Side of Internet Freedom:

A dissident’s social networking and Twitter feed is a handy guide to his political views, his career, his personal habits and his network of like-thinking allies, friends and family. A cyber surfing policeman can compile a dossier on a regime opponent without the trouble of the street surveillance and telephone tapping required in a pre-Net world. […] Since that revolt collapsed, Iran has become a cautionary tale. The Iranian police eagerly followed the electronic trails left by activists, which assisted them in making thousands of arrests in the crackdown that followed. The government even crowd-sourced its hunt for enemies, posting on the Web the photos of unidentified demonstrators and inviting Iranians to identify them.

On a related note, in the comments section of a recent post on The Atlantic‘s blog, there has been an interesting debate on the responsibilities of the press. Senior editor Alexis Madrigal posted a pamphlet that was distributed by dissidents regarding protest plans for this past Friday. Madrigal’s writeup included a translation of the document, writing:

[…] [T]he creators of the pamphlet explicitly asked that the pamphlet not be distributed on Twitter or Facebook, only through email or other contacts. We’re publishing this piece of ephemera because we think it’s a fascinating part of the historical record of what may end up becoming a very historic day for Egypt.

In an update to the original article, Madrigal explains how The Atlantic decided which portions of the pamphlet to translate and publish:

My guiding principles were to stay away from the small amount of tactical information in the pamphlet. Instead, we ran the more general pages. There is nothing in these pages that goes beyond standard advice and broad political statements. Broadly, we were trying to balance the historic nature of the document and protest with the safety of protesters.