How Publishing Is Evolving and Why We Still Need Copyeditors 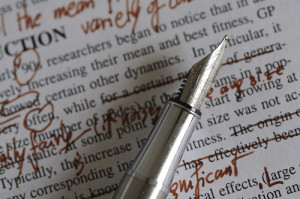 Tan quotes Nishith Arora, chairman of MPS Limited, who notes that in publishing, copyediting is often outsourced to the English-speaking countries like India.

Processes such as reviewing, proofreading, and proof correction go electronic — and, in some cases, online — for greater accuracy and faster turnaround. Delays caused by authors traveling have become a non-issue…

Indeed, the publishing process as we knew it consisted of quite a few steps, now eliminated by entities like Amazon that make self-publishing if not attractive, then at least doable. As Jon Evans notes in TechCrunch, the simplified “publishing pipeline” looked like this:

author — editor — copyeditor — designer — typesetter — printer — distributor — wholesaler — bookstore/library — reader
[…] Today, the absence of copyediting, design, typesetting, and above all, editing, means that will be one seriously amateur-hour book.

The recent news about publishers laying off their editors, designers, and copyeditors prove Evans right. Just last week, The Denver Post announced its plan to lay off two-thirds of its copyeditors by the end of this month as part of its “newsroom restructuring.” Michael Roberts, who has covered this development, notes that the move “prompted plenty of discussion about the state of journalism today.”

One could argue that not only does raising revenue balance the equation as well, it makes for a more likely survival of the entity in question. When the price of oil rises, for instance, Exxon Mobil doesn’t dilute its gasoline with water; it raises the price of its product to a level that covers costs *and* allows for a healthy net.

We’ve written several times about the virtues of copyediting. Basically, if you produce content, even if it’s online-only, you need a copyeditor. A spell-checker isn’t enough. Everyone is cutting corners these days, so your copyeditor can also multitask. For example, at SixEstate, I also blog, and I optimize the posts I edit.

In his blog post, “Spelling still counts, but not as much as that,” on the You Don’t Say blog at The Baltimore Sun, John E. McIntyre reacts to the news that the journalism school at the University of North Carolina has dropped the spelling portion from its spelling-and-grammar test, replacing it with a word-usage section. McIntyre is OK with that, unlike “the journalism-isn’t-what-it used-to-be crowd,” but he does point out:

Today, any writer who does not make use of electronic spell-checking to detect misspellings, typos, and inconsistencies in proper names is a fool. And any writer who is not aware of the limitations of spell-check is doubly a fool.

Just like every other part of the publishing process, copyediting has come a long way, evolving with the times. At SixEstate, we mostly adhere to the AP style, but we’ve also strayed from it from time to time, to keep up with the modern use of language, when we’ve felt that AP wasn’t quick enough to change its rules. Sometimes, I Google the word or phrase in question, and the version with the most entries wins.

McIntyre, who always has a few things to say about AP, proposes to ignore the rules, the AP-sanctioned ones included:

I suggest that you ought to ignore rules that have no point. Give the stylebook editors something to see. The risks are minimal. Yes, some unenlightened editor may change things back. […] Be bold, brave, and resolute. What you have to gain is your self-respect in wielding the language vigorously…

Kate Dailey at the BBC News Magazine asks whether the meanings of words that the language warriors consider improper are still “destined to take over.” She interviews George Lakoff, a professor of linguistics at the University of California, Berkeley, who says that “the rules are, there are no rules,” and that language purists need to cut their losses at some point and back off:

Don’t let someone misusing a word ruin your day. These ideas of rules came about in the 19th Century, when there were rich people who wanted to know how to talk better and other people who decided they wanted to make money teaching them.

Though it’s useful to have understood definitions for clarity’s sake, if the masses decide that a word has a common meaning, that’s what the word means — no matter what the elite say…

Clarity, consistency, flexibility — these three aspects are important to today’s copyeditor. Beyond that, there’s always Google.