The English Language Is Dead: Are the Reports Greatly Exaggerated?

Gene Weingarten laments the death of the English language in his very amusing article in The Washington Post. He starts off somewhat dramatically:

The English language, which arose from humble Anglo-Saxon roots to become the lingua franca of 600 million people worldwide and the dominant lexicon of international discourse, is dead. It succumbed last month at the age of 1,617 after a long illness. It is survived by an ignominiously diminished form of itself.

Apparently, the fatal blow was delivered when The Washington Post printed a letter from a reader in which that reader refers to the the presidential couple as “Obama’s,” all the while blasting the paper for its supposedly improper use of language. Weingarten calls the incident “an illiterate proofreading of an illiterate criticism of an illiteracy. Moments later,” he says, “already severely weakened, English died of shame.”

Weingarten then cites the reasons for the language’s alleged demise, some of which we’ve also talked about on this blog. He blames it on the newspapers, who had originally set high standards for usage of the English language, but eventually ended up contributing to their deterioration. Weingarten explains:

Beset by the need to cut costs, and influenced by decreased public attention to grammar, punctuation and syntax in an era of unedited blogs and abbreviated instant communication, newspaper publishers have been cutting back on the use of copy editing, sometimes eliminating it entirely. 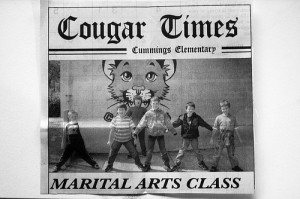 He brings up several examples of the offending misuse of language by the newspapers that he has encountered (we won’t name all the names, just the biggest ones), such as “pronounciation” (apparently, by The Boston Globe), “Alot,” “eeks out a living” (The Miami Herald), and “prostrate cancer.”

Turns out, however, there’s nothing that Weingarten hates more than the phrase “reach out to,” when it’s used as a synonym for “call on the phone,” or “attempt to contact.” He calls it a “the vomitous verbal construction” and points out that “the New York Times alone has used it more than 20 times in a number of contextually indefensible ways.”

Max Fisher at The Atlantic Wire reminds us that Weingarten wasn’t the first one to state his concern about the collapse of the English language. Fisher recalls that George Orwell had issued “similar dire warnings… many times in the first half of the 20th century, most notably in his 1946 essay, ‘Politics and the English Language.'”

Orwell famously defined language as ‘an instrument for expressing and not for concealing or preventing thought.’ He declared, ‘the fight against bad English is not frivolous and is not the exclusive concern of professional writers.’

To paraphrase Mark Twain, the reports of the death of the English language are greatly exaggerated. Maybe it’s just sick. However, if you’ve been reading the news, you might agree that the prognosis isn’t good.

Just yesterday, Andrew Vanacore reported for the Associated Press that Forbes is implementing some serious changes in an attempt to bring more traffic to its online edition and to “provide extra fodder for the print edition, which has been forced to cut staff because of a dramatic decline in advertising.”

The new approach is modeled on True/Slant, which was founded by former Forbes editor Lewis D’Vorkin. True/Slant relies on hundreds of bloggers, who are expected to promote their writing via vigorous social networking and to engage with their readers by replying to comments.

At first glance, this type of “entrepreneurial journalism” sounds timely and promising. As Vanacore reports,

Along with a redesigned magazine that arrives on newsstands Friday [today], Forbes is constructing a vast network of bloggers, each expected to build their own personal audience and brand around a steady stream of Web postings and links to social sites like Facebook and Twitter.

Then the red flag is raised. Many of the new bloggers, according to Vanacore, won’t have any reporting background:

Instead, Forbes is recruiting specialists to write on specific topics. And they won’t have a lot of immediate oversight. Forbes.com has gradually shifted to a blogging system in which contributors publish straight to the Web, rather than going through copy editing. [Emphasis ours.]

Bringing in this many “untested contributors” would boost up production volume, sure, but, as Vanacore predicts — and we couldn’t agree more — it might compromise the reputation of the brand that Forbes had spent decades building.

At least some of us are able to laugh about it all. We’ll end with Weingarten’s sharp words:

It was not immediately clear to what degree the English language will be mourned, or if it will be mourned at all. In the United States, English has become increasingly irrelevant, particularly among young adults. Once the most popular major at the nation’s leading colleges and universities, it now often trails more pragmatic disciplines, such as economics, politics, government, and, ironically, ‘communications,’ which increasingly involves learning to write mobile-device-friendly ads for products like Cheez Doodles.
Many people interviewed for this obituary appeared unmoved by the news, including Anthony Incognito of Crystal City, a typical man in the street.
‘Between you and I,’ he said, ‘I could care less.’