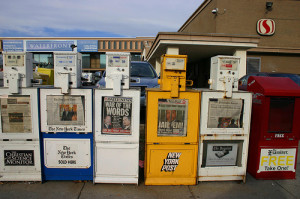 Last week, we talked about the New Orleans’ Times-Picayune (TP) cutbacks of its daily print production and moving a bulk of its content online. As Nieman Journalism Lab‘s Mark Coddington notes, during its second week, the conversation, which initially started about the TP move, “began to shift from New Orleans in particular to the future of the newspaper industry as a whole.”

Coddington notes that Mathew Ingram of GigaOM and CUNY’s Jeff Jarvis “both argued that we need to get past our fixation with print journalism, using it when it’s profitable but feeling free to drop it when it’s not.”

Harsh words, maybe, to a print journalism lover’s ears, but Ingram and Jarvis are not alone, of course. This week, we also learned that the MIT’s Technology Review is going fully “digital first.”

As GigaOm‘s Ingram points out, print publications have been experimenting with smartphone apps, paywalls, and other “methods of handling the ongoing disruption that the web and digital media have produced, but very few have taken a fully ‘digital first’ approach.”

Jason Pontin, Editor in Chief and Publisher of Technology Review, explains on the publication’s website what this would entail:

[P]eople will be able to read everything we publish free of charge on the Web, and we’ll publish nothing first in print. Some stories we’ll post online first, and then in our magazines. Other stories we’ll publish simultaneously in various media. The website will be the complete repository of everything we publish. For us, print will be just another platform (to use the jargon of software development), and by no means the most important. […]
For a media company to declare itself digital first is mostly a matter of emphasis. Most simply, we feel we can better serve our various audiences on electronic platforms: we can do smarter and link-y journalism, design more beautiful and interactive experiences, and create higher-value and unique advertising opportunities for agencies and their clients. For us, digital first is a mode of being that promotes innovation and excellence.

Pontin also recalls that the early experiments with “all or nothing” paywalls by some print publications had brought “disastrous results.” However, “porous paywalls,” he says, have worked well for such publications as The New York Times and the Financial Times.

Pontin also notes that while it worked for The New York Times and Financial Times, it hasn’t for his publication. “My working hypothesis about why our porous paywall failed? We don’t publish so much that a threshold irritates enough readers,” he says.

Paywalls, no matter how elegantly devised, have for me the smell of paper and ink, as if publishers were trying to revive a subscription business irremediably tied to the distribution of physical products. We want something more innovative and natively digital: a true electronic homologue to the old circulation business that will enhance readers’ interactions with Technology Review.

We’re uninterested in one idea frequently packed inside the words: that digital-first publishers should throw open their editorial pages to so-called content from a ragbag of constituents, including nonwriters and marketers.

Ingram brings up a good point: One of the reasons Technology Review was able to experiment with different publishing models is because the magazine is a not-for-profit corporation powered by the MIT; “in the same way that British newspaper The Guardian was able to take a ‘digital first’ approach thanks in part to being owned by a charitable trust rather than a for-profit or publicly-traded corporation.”

Bottom line is, publications do whatever it takes to survive. Studies have proven that readers would turn to free alternatives before they pay for their news, on tablets and other reading devices. The demise (in May) of paywall and news aggregation site, Ongo, after only 16 months, also shows that readers may not necessarily want to get their news from aggregation sites.

Ongo had a decent pedigree: It was founded by the former PayPal and eBay executive Alex Kazim; was backed up by The New York Times and the Washington Post; and was also proclaimed to be the “Hulu of news.” Still, it didn’t help, prompting Laura Hazard Owen of paidContent to speculate that “paywall implementation may be best left to individual papers.”

And one needn’t look further for just such a paywall success story than The New York Times that launched its “porous” paywall in May 2011. On The Huffington Post, contributor Mike Smith recalls David Carr’s (of NYT) keynote at the Internet Week in May in NYC. Smith writes:

Carr explained, from a reporter’s viewpoint, that if he had two ideas for stories or columns in mind, he would push for one to make the print edition and then let the other one ‘get shoved on to the website.’ Not anymore. ‘The (free) web gets your story buried. The web sucks all the air out,’ of a piece, he thought. […] Put me behind the wall, man!’

This only goes to show that we have only seen the beginning of print pubs embracing paywalls and “digital first” tactics, on many levels and with various shades of success. To what extent print journalism will evolve remains to be seen, of course, but it doesn’t have a choice but to go digital first, second, or, third.

Image by Elvert Barnes, used under its Creative Commons license.