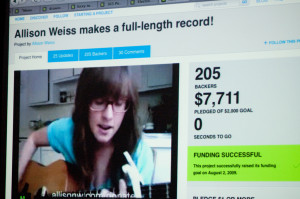 In the summer of 2010, 20th Century Fox announced that it was casting three lead child roles in Cameron Crowe’s new movie We Bought a Zoo via online video submissions. Auditioners had very few requirements, besides age; children of all backgrounds who didn’t have agents were encouraged to film themselves reading a few pages of lines and then submit their audition to 20th Century Fox via YouTube.

In a time when Hollywood was increasingly depending on household names to help market films, it was an unusual move. However, crowdsourcing as a marketing tool had taken off and Hollywood was ready to test its box-office impact.

Merriam-Webster defines crowdsourcing as “the practice of obtaining needed services, ideas, or content by soliciting contributions from a large group of people and especially from the online community rather than from traditional employees or suppliers.” As a marketing tool, the benefits are often two-fold: creative costs are lowered by getting free or relatively cheap content, and it creates a buzz about the product before it even goes into production.

In the case of We Bought a Zoo, the producers ultimately chose actors who already had established careers and even high-profile names; however, the crowdsourcing tactic put the film on the radar of adults with young children, a group that overlaps with the demographic with the highest movie attendance rate — adults ages 25-39, according to the MPAA.

Three years later, crowdsourcing is still being employed as a marketing tactic. Budweiser has jumped on the crowdsourcing wagon this week as part of its Super Bowl campaign. The company began tweeting for the first time this past Sunday. For instance: “This year’s #SuperBowl star? Our new #Clydesdales foal — and we need help to name it. Tweet us ideas via #Clydesdales.”

Budweiser probably isn’t saving much money in the creative department by getting fans to name the new Clydesdales, but the company is certainly fostering brand engagement in a week ramping up to a Super Bowl that is bound to have one of the highest rates of interactive marketing we have seen to date.

But Kenneith Hein of Forbes asks:

Has crowdsourced marketing hit its pinnacle? According to some experts, the answer is a definitive yes. ‘It’s probably as big as it’s going to get,’ said Todd Wasserman, marketing and advertising editor at Mashable. ‘Personally, I think it’s been done so much that it’s no longer that notable.’

While crowdsourced marketing may be reaching its saturation point, its cousin “crowdfunding” has had its best year to date, when measured by the success of websites such as Kickstarter and Indiegogo. Businesses or individuals submit their projects to crowdfunding sites, and distribute their individual page to followers and friends as a means of fundraising.

Once projects have a donor base, they can count on those donors becoming consumers. Who wouldn’t want to see the final product of something you contributed money to in its infancy?

Looping consumers in early guarantees a captivated audience; it creates familiarity and sense of loyalty before product even comes out. Companies have been able to reduce overhead during production while simultaneously building a guaranteed consumer base. Game projects, for example, are some of the top grossers on Kickstarter. The donors that help fund game development are also incredibly likely to buy the game when it’s finished.

It looks as though crowdfunding will remain popular for the near future, as it increases the level of consumers’ participation in the projects. As a funder told The New York Times’ David Pogue, “I usually get to know the people behind the transaction a bit. It’s a community. The audience participates with the providers, not just people trying to game their seller ratings.”