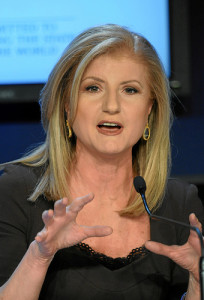 AOL Inc. has agreed to buy news and opinion site The Huffington Post for $315 million, continuing its corporate turnaround mission to be an online content provider.

The Huffington Post was co-founded in 2005 by Arianna Huffington and former AOL executive Kenneth Lerer, backed by just $1 million in investments. It is now ranked among the top 10 Internet destinations for cultural and global news, averaging 25 million U.S. visitors per month. The site reports that its traffic is growing at a rate of 22% based on comparisons between December 2009 and December 2010.

Huffington said, “By uniting AOL and The Huffington Post, we are creating one of the largest destinations for smart content and community on the Internet. And we intend to keep making it better and better.”

The official press release brags, “The combination of AOL’s infrastructure and scale with The Huffington Post’s pioneering approach to news and innovative community building among a broad and sophisticated audience will mark a seminal moment in the evolution of digital journalism and online engagement.”

Huffington will now be President and Editor-in-Chief of the newly formed The Huffington Post Media Group (HPMG), comprised of both Huffington Post and AOL content, including Engadget, Moviefone, MapQuest, Black Voices, PopEater, AOL Music, AOL Latino, AutoBlog, Patch, StyleList, and others. Of the merger, she said, “By combining HuffPost with AOL’s network of sites, thriving video initiative, local focus, and international reach, we know we’ll be creating a company that can have an enormous impact, reaching a global audience on every imaginable platform.”

HPMG will also include TechCrunch, acquired by AOL just last October as part of the latter’s rebranding efforts. Paul Carr, cheeky columnist for TechCrunch, writes, “Arianna Huffington’s genius is to churn out enough SEO crap to bring in the traffic and then to use the resulting advertising revenue — and her personal influence — to employ top class reporters and commentators to drag the quality average back up. And somehow it works.”

In a piece for his BBC-hosted dot.Rory blog, technology columnist Rory Cellan-Jones compares the AOL/Huffington Post merger with the recent announcement regarding News Corporation’s iPad-only publication The Daily. “We have two media empires making very different assessments of what the future of news online looks like,” he writes. Cellan-Jones finds particular contrast in AOL continuing the free content approach with advertising as the revenue stream rather than The Daily’s subscription model. “Anyone who cares about the future of online journalism will hope that both he and AOL can make money from their different ideas of what readers want from the web,” he concludes.

John Nichols writes about politics for The Nation, and in a partner content piece for NPR.org, he writes:

Media companies, old and new, are rethinking and repositioning in order to grab pieces of a future that will be more digital and less analog, more dynamic and less ponderous, more opinionated and less obsessed with a balance that never was achieved. But this is about a lot more than AOL and Huffington Post. […] This deal and arrangements like it approach fundamental questions of producing journalism when traditional sources [of] revenue are drying up, and go to the heart of much broader debates about how citizens will get the information they need to engage in a democratic process that is now far from functional.

Together, AOL and The Huffington Post will reach an expected 270 million people worldwide. “I think that we have an incredible opportunity to tell the stories of our times, at the national level, at the local level and increasingly at the international level,” said Huffington. Tim Armstrong, Chairman and CEO of AOL, said, “Together, our companies will embrace the digital future and become a digital destination that delivers unmatched experiences for both consumers and advertisers.”

The transaction is expected to close by the beginning of the second quarter this year.