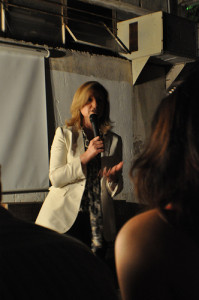 Arianna Huffington is on a mission to expand citizen journalism, particularly during the 2012 presidential campaign, with AOL’s upcoming acquisition of The Huffington Post. “We will have thousands and thousands of people covering the election. Covering the Republicans. Covering the Democrats. Just being transparent about it,” she said.

Huffington plans to use AOL’s Patch to aid in the expansion. Patch has been the target of criticism in the past because, among other things, it was snatching up paid employees from other publications. The Huffington Post receives its own fair share of criticism as well, but for not spending enough money — i.e., allegedly exploiting its unpaid writers.

Tim Rutten, 30-year veteran journalist at the Los Angeles Times, writes, “It’s already clear that the merger will push more journalists more deeply into the tragically expanding low-wage sector of our increasingly brutal economy. That’s a development that will hurt not only the people who gather and edit the news but also readers and viewers.”

For those who make their living as writers, however, it’s a different story. Mayhill Fowler quit writing for The Huffington Post last year because the website refused to pay her. As Debra J. Saunders of the San Francisco Chronicle writes, “‘Citizen journalist,’ Mayhill Fowler discovered, has a very specific meaning: Free.”

On her own blog, Fowler writes:

What is really intriguing is that Arianna decided to go corporate rather than double down on the Huff Post strengths. First of all, this decision gives the lie to her frequent assertion this past year that she is pro Main and con Wall Street. Of course, the hypocrisy of her ‘let’s hear it for the little people’ mantra has already been undercut by her refusal to pay bloggers like me. And I had been waiting for the moment when senators like John Kerry and economists like Robert Reich finally realized that they cannot say one thing and do another: to talk sympathy for working people and yet blog at a site that treats its writers badly. Eventually, celebrity blogging at Huff Post was always going to become the modern equivalent of a membership in an all-white, all-male club: a choice politicians, however reluctantly, would have to avoid. It was only a matter of time.

In a blost post where Fowler initially explained why she left The Huffington Post, she writes, “Let this be a warning to you, citizen journalism enthusiasts. In the end, what you are doing really is enhancing somebody else’s bottom line.”