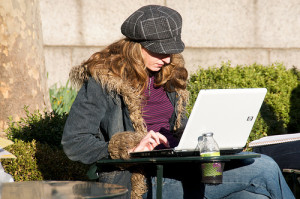 Over the next decade, women will control two-thirds of consumer wealth in the United States. Women make 85 percent of all brand purchases in the U.S., adding up to $5 trillion in annual spending and making them the key gender for marketers to consider. In regards to online marketing, though, it’s important to understand women’s Internet style.

Unicast, a company that focuses on interactive advertising and marketing technology, conducted a poll via The Polling Company of 516 adult women regarding their plans for online usage this summer. According to the report (the link leads to a PDF doc), 95 percent of women plan to go online at some point this summer.

Some of Unicast’s other findings include:

Across the board, women are more likely to pay attention to advertisements discovered through blogs rather than other types of websites, regardless of the type of ad (e.g., sales offers, promotion codes, survey or quiz with real-time results, entry submittal and prize, etc.), according to the Unicast report. Unfortunately, that report states that only 13 percent of women plan to visit a blog this summer, a number that seems a little low to me.

As far as moms go, the report reads:

Some further statistics about moms and online usage, compiled by Social Media Examiner and specific to Facebook, are:

“Facebook is fertile ground for marketers to engage mothers and drive sales, but it needs to be done on their terms,” said Kevin Burke, president of Lucid Marketing, a boutique agency that focuses on marketing to mothers. “They have no time for brands that don’t ‘get it,’ but they do embrace brands that play by their rules.” (See also: The Pampers Dry Max fiasco.)

Women with children at home are 20 percent more likely to use Facebook, according to some statistics gathered by global PR firm Porter Novelli. The firm also discovered that at 57 percent, women comprise the larger segment of social media users across the globe.

Some other stats include:

Statistics aren’t necessarily solid numbers, however. One glaring discrepancy is the number quoted for blog readership, which is 13 percent in the Unicast study, but 32 percent according to Porter Novelli’s sources, which aren’t actually cited. Still, numbers generated by other organizations find pretty similar data for most items, even if the digits aren’t exactly the same.

Flowtown‘s graphic representation of data from Quantcast.com and Smallbiztrends.com states that:

Entertainment and food are the top subjects that women read and/or comment about online, at 53 percent and 47 percent, respectively. Only 8 percent read about gadgets and technology. Don’t discount women from stererotypically male topics, however. Nearly half of all athletics fans are women, regardless of sport type (e.g., soccer, football, baseball), and they spend 80 percent of sports-apparel dollars.

The Unicast study mentioned above mentions that women aged 18-26 use the Internet more than other age groups. Don’t rule out the older age brackets, though. Baby Boomers, for example, have great buying power. Women over the age of 50 own more than three-fourths of the nation’s wealth, and they spend 2.5 times more of what an average consumer spends.

Until recently, Boomer’s social media usage lagged far behind the younger set. Porter Novelli quotes a 550 percent — no, that’s not a typo — increase in 2009 for social media signups for those aged 55 and up, but other figures are much more conservative. Statistics for the increases in social media usage among Baby Boomers vary wildly, but the undeniable truth is that the usage is growing rapidly.

Some figures taken from an eMarketer report and a Mashable article state that: