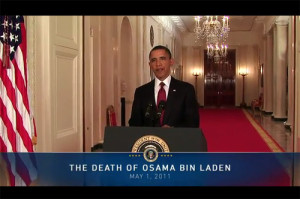 A friend of mine who regularly keeps up with Reddit clued me into the Osama bin Laden assassination before it even hit the traditional media. The site’s catchphrase is “news before it happens” — appropriate enough considering how the story broke.

The entire Internet buzzed with the news. Twitter alone experienced one of its highest message burst totals, with roughly 4,000 per second during President Barack Obama’s official announcement Sunday night, peaking at more than 5,100. The microblogging site also claims it experienced “the highest sustained rate of tweets ever.”

But the real credit for breaking the story goes to IT consultant Sohaib Athar (@ReallyVirtual), who is currently living in the mountains of Abbottabad in northern Pakistan, where bin Laden was killed. Athar unwittingly live-tweeted the attack on bin Laden in a series of tweets, including one which reads:

A huge window shaking bang here in Abbottabad Cantt. I hope its not the start of something nasty :-S

Quickly becoming quite an online celebrity himself, Athar also tweeted:

I apologize for reporting the operation ‘unwittingly/unknowingly’ – had I known about it, I would have tweeted about it ‘wittingly’ I swear.

Interesting, I didn’t think my name would trend on twtter before releasing a couple of rock albums and a few award-winning software….

There is a nice timeline of Athar’s tweets compiled at Tweet Library. Athar has also uploaded video to his Youtube channel, shot by his friend, of bin Laden’s compound after the attack.

Some are calling the past 24 hours Twitter’s “CNN moment,” referring to the TV station’s popularity explosion during its coverage of the first Gulf War. Greg Sandoval, a senior writer for CNet, says it is “by far the weightiest story that Twitter has ever helped to break.”

Where Twitter’s strengths are highlighted, so are the print media’s weaknesses. Michael Calderone, senior media reporter for The Huffington Post, writes:

The cable networks, which at times leap too fast into a breaking story and misreport early on, were restrained in waiting until their reporters confirmed the news. As a result, they seemed a step or two behind the latest bit of information available on Twitter. Several TV journalists jumped back and forth between appearing on air and updating over Twitter.
But with early unconfirmed bin Laden reports floating online, some peculiar moments ensued as on-air reporters still held back from saying too much prior to an actual confirmation.
And news organizations that broke the momentous news first over Twitter, like the New York Times in a tweet by reporter Jeff Zeleny, quickly shifted to an online piece while re-imagining a print edition for posterity. The Times had to rip up Monday’s front page to accommodate a six-column headline that did the huge story justice.

And all of that is fine, considering the flak given to traditional news outlets when they don’t exercise restraint and caution in their reporting. Still, it’s somewhat crippling to those organizations and serves only to highlight the growing obsolescence of print media.

In just one example of the speed and comprehensiveness afforded online news outlets, the Associated Press (AP) coverage via Yahoo! News includes:

The AP is making use of social media to involve its readers, too. On the its Facebook page, the news organization is soliciting user-submitted videos to its YouSendIt dropbox on the topic “What does the death of Osama bin Laden mean to you?”

Online video is, of course, a big contribution to the development of this story. YouTube has a CitizenTube Spotlight on its home page, pointing to clips related bin Laden’s death. Already a social media darling since first announcing his White House bid a few years ago, expect President Obama’s online video clips from the past few days to dominate the ‘net for a while. Jeremy Scott writes on ReelSEO, “When the week is over, and the view counts are tallied, you can expect Obama to be the star of several of the top-ten clips.”