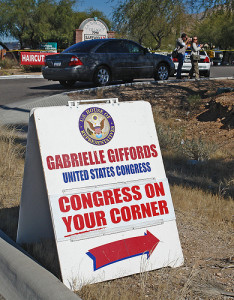 The U.S. has been rocked by the assassination attempt on Congresswoman Gabrielle Giffords this past weekend. The Arizona shooting incident wounded 14 people and left six others dead, including U.S. District Judge John M. Roll and 9-year-old Christina Taylor Green.

Adding to the chaos, nearly every major media outlet made reporting mistakes as the news broke Saturday. The worst offense was announcing the death of Giffords, who is actually still alive, albeit in critical condition. These gaffs have once again brought up important discussions regarding breaking news and media of all formats, including social media.

NPR appears to have been the first media outlet to report on the Tucson tragedy, as Arizona Public Radio News Director Peter Michaels’ wife was at the shopping center where the incident took place and notified her husband. Along with mostly correct information, NPR erroneously broadcast about Giffords’ death in a radio newscast, on NPR.org, in an email news alert to subscribers, as well as a Twitter update.

Steve Safran, a contributor to Lost Remote, catalogs some of the Twitter errors of major media outlets, including NPR:

One of the first criticisms of those who deleted their tweets might be lack of transparency, something for which I’m a strong advocate. There is another viewpoint to consider, however. Safran writes:

For hours after it was reported [Giffords] was alive, people kept discovering the original tweet that she was dead, retweeting it to their friends without seeing the update. In several cases, the retweet of the incorrect report came three or more hours after the report first spread.

The pressure of social media, with its need for immediacy, sometimes makes it easier to jump the gun — so to speak — when breaking news. TV stations are not exempt from that pressure, however. Associated Press television writer David Bauder reports, “Within a half hour, all three cable news networks had bannered the headline of Giffords’ supposed death.” CBS, NBC, Fox, and CNN all announced her death, as did ABC, although the latter did quote her communications director who was saying she was still alive. Bauder writes:

Former CBS News anchor Dan Rather said that if he were covering the story in the 1970s and 1980s, he would not likely have gone with the NPR report. But if he were in the anchor chair in 2011, he probably would have. ‘The pressure is immediate and almost crushing on you and your news organization to match that,’ he said. ‘Mostly what you hear are sets all over the world going to your competition and computers, handheld or otherwise, going to a different site.’

[I]n a situation so chaotic and changing so swiftly, we should have been more cautious. There were, obviously, conflicting reports from authorities and other sources. The error we made was unintentional, an error of judgment in a fast-breaking situation. [… We ] have been reminded of the challenges and professional responsibilities of reporting on fast-breaking news at a time and in an environment where information and misinformation move at light speed. 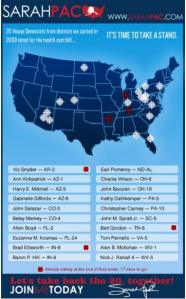 Also facing public scrutiny is the Facebook page of former Alaska governor Sarah Palin. A note published on the page, entitled “Don’t Get Demoralized! Get Organized! Take Back the 20!” contains an image of a U.S. map. Twenty “targets” on the map are marked by tiny images that denote districts with seats to win back from Democrats, including Giffords’ district. The symbols are pretty easily interpreted as crosshairs from the sight of a gun.

When the note was first published on March 23, 2010, there were calls for complaints to Facebook, reporting the image as “graphic or violent.” Giffords herself criticized the image when it first surfaced, saying, “We’re on Sarah Palin’s targeted list. The way that she has it depicted has the crosshairs of a gun sight over our district. When people do that, they’ve got to realize there are consequences to that action.”

Discussions back then but didn’t even come close to criticisms in the past three days, though, with seemingly endless speculation that Giffords’ shooter, Jared Lee Loughner, was somehow inspired by the image. In Palin’s defense, Jack Shafer, editor-at-large for liberal news site Slate, writes:

For as long as I’ve been alive, crosshairs and bull’s-eyes have been an accepted part of the graphical lexicon when it comes to political debates. Such ‘inflammatory’ words as targeting, attacking, destroying, blasting, crushing, burying, knee-capping, and others have similarly guided political thought and action. Not once have the use of these images or words tempted me or anybody else I know to kill.

Palin staffer Rebecca Mansour insists that the symbols were “never ever, ever intended to be gun sights,” and describes the icons as “surveyor’s symbols.” But Palin’s own tweet suggests otherwise: “Commonsense Conservatives & lovers of America: ‘Don’t Retreat, Instead – RELOAD!’ Pls see my Facebook page.”