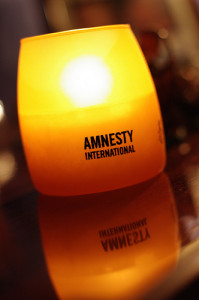 Human rights advocacy group Amnesty International launched a social media campaign late last month on Facebook, Twitter, MySpace, and across the blogosphere. The goal was to raise funds to buy a full page protest ad against Royal Dutch Shell for what the organization believes are environmental transgressions in the Niger Delta region of Nigeria, specifically, “the human cost of their activities,” which includes, “the millions of people drinking polluted water, growing crops in polluted soil and raising children in polluted homes.”

The ad was projected to run in a London-based publication on May 18 to coincide with Shell’s annual general meeting (AGM) of shareholders within the city. The campaign exceeded Amnesty International’s expectations, receiving over 2,100 donations totaling £30,000 within three weeks. The ads will be published today in the London Evening Standard and Metro, as well as emblazoned on the side of a van driving around the city throughout the day. (You can check out a sample print ad at the bottom of this post.)

This campaign marks the first time that Amnesty International has used fundraising to finance a campaigning ad. The organization considers this campaign to be “hugely successful.” 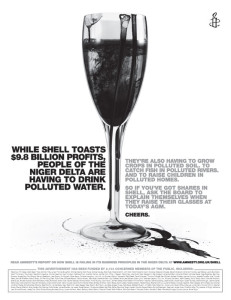 Mary then continued to update the original blog post with fundraising results, and the organization even raised the monetary target once the first goal was reached. Additionally, a new blog entry was posted with more detailed updates, a real-time GPS tracking map of the ad-covered van, powered by InstaMapper.com, and fresh calls to action to keep the social media momentum going. Some of the specific suggestions Amnesty International gave to its supporters included sharing photographs of themselves with the print ad via Twitter with the hashtag #shellagm, and tweeting about the van sightings.