Social Media in the Hunt for Boston Bombers 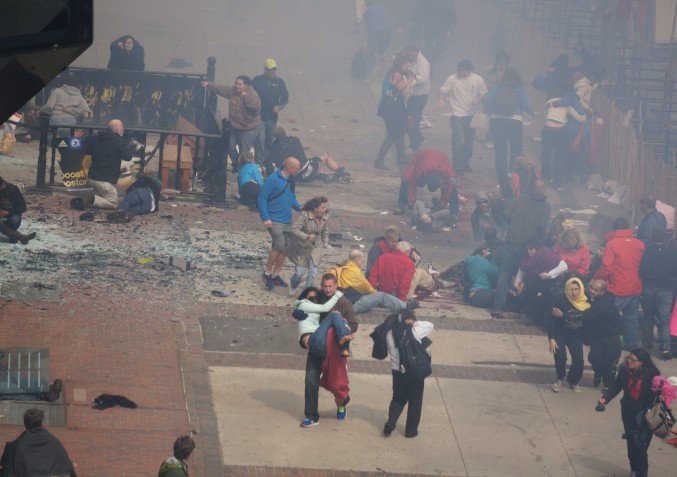 On the day following the April 15 Boston bombing, hopes were high that the case would be solved with images recorded by the public, and federal officials encouraged this optimism. The investigators in Boston asked the public for help. NPR’s Alan Greenblatt said:

The people trying to ‘crowdsleuth’ Monday’s blasts are part of a cottage industry. In the age of the Internet, Amber Alerts and TV shows such as America’s Most Wanted, many people with no connection to law enforcement devote countless hours to trying to solve crimes… Groups of amateur sleuths […] have helped solve dozens of missing person and murder cases, poring over old records.

Greenblatt sought the opinions of experts, including Robert McCrie of the John Jay College of Criminal Justice, teacher of security management, who told the journalist:

Our expectation of a horrific crime like this being solved is higher than it was in the past because of the ubiquitous nature of the collecting of images… Invariably, it’s the tips and the help that is provided by the public that results in the solution of most of our cases today.

Using the Masses to Sort Through Images

For a while there, it looked like maybe the brave new world is not so bad after all. Benj Arriola voices the opinion that crime-solving is just like any other Internet crowdsourcing endeavor, and shows some of the relevant pictures of the marathon tragedy, and provides links to more. There is strength in numbers. He writes:

With the online communities of 4Chan, an image sharing community and Reddit, a social bookmarking community, a group of people have been contributing and further promoting this on Facebook, helping solve the Boston Marathon Explosion crime. The main images were posted on imgur, an image sharing site.

Between the government’s own surveillance cameras and the digital appliances of citizens, the authorities had over a million images to look at, and 1,000 hours of video footage. This abundance could easily become a case of Too Much Information. Not in the sense that it is unseemly or embarrassing, but in the sense of system overload. The IBR plan considers your adjusted gross income, the size of your debt and the size of your family—and may lower your monthly loan payments. And if you work in the public or nonprofit sectors, the teachers and instructors loan forgiveness programs may cancel your remaining debt (principal and interest) after 10 years and 120 qualifying payments.

Arriola points out that none of this is brand-new, and quotes a Philadelphia police official who said that, as of December 2012, his department had made 112 arrests thanks to “videos shared online and promoted in social media sites.” The reporter goes on to say:

In a survey by LexisNexis Risk Solutions, they found that 4 out of 5 people in law enforcement agencies use various social media platforms to assist investigations. 67% honestly believe social media does help solve crime and 85% of the time search warrants using social media to establish probably cause hold up in trial courts when challenged.

And this is of course the very thing that worries a lot of Americans. The total surveillance society is no longer a gleam in some dictator’s eye. It is upon us. Last week, we mentioned that one of the conspiracy theories is that the government holds onto certain key pieces of legislation and waits for something all-absorbing to happen in the news. Then the extremely objectionable law is quietly passed. In this case, that law looks to be CISPA, the Cyber Intelligence Sharing and Protection Act, which opponents say opens the door for privacy invasion on a massive scale.

The Cost of Protecting Our Eyes

And then there is the problem of journalistic integrity in the big leagues, facing the temptation to compromise itself. The New York Daily News was criticized for improperly editing a pictorial representation of the scene. Joe Pompeo reported:

… [T]he News ran a photo taken by John Tlumacki of The Boston Globe showing an injured woman lying in a pool of blood while being tended to by a civilian. But the version published by the News seemed to erase a gory wound to the woman’s leg that was visible in other publications that used the photo. On Tuesday evening, a link to a blog post exposing the manipulation began circulating among News journalists, some of whom were none-too-pleased about the situation…

The journalist reminds us of the ethics code of the National Press Photographers Association, which insists that images should not be manipulated. The publication at first declined to comment on its editorial decision, then issued a statement via spokesperson, Ken Frydman, whom Pompeo quotes:

The Daily News edited that photo out of sensitivity to the victims, the families and the survivors. There were far more gory photos that the paper chose not to run, and frankly I think the rest of the media should have been as sensitive as the Daily News.

This is a test case in terms of electronics and amateur sleuthing. If they can find the lead that leads to the perpetrators, it will be a new standard of law enforcement.

But some observers frame the matter differently. Count on the English to dash cold water onto American enthusiasm. The title says it all: “Boston bombing: How internet detectives got it very wrong.” The author is Dave Lee, who reports on technology news for the British Broadcasting Company. His discussion of the “subreddit” called “Find Boston Bombers” mentions several disturbing factors:

Internet users tried for days to piece together clues about the culprits of the Boston bombings. The result? They got it wrong…

With each suspect, a rush to find their real identities — and in some cases, social media profiles and groups were peppered with threatening messages… [T]he same pictures that had circulated on Reddit and 4Chan found their way to the front page of the New York Post…

The New Statesman went as far as to call it a ‘racist Where’s Wally’, with the suggestion that there was emphasis on pointing out non-whites among the crowds.

A young man who has been missing for several weeks was misidentified and apologized to. Some other folks now fear for their lives, as the potential for vigilante action still exists. As soon as the FBI had the officially real suspects, the Reddit moderators directed users to delete any pictures that weren’t them. It can’t be more than a gesture, since copies could exist in the millions. Lee quotes some very upset Reddit users about how bad the outcome was.

He also quotes Charlie Beckett, of a think tank called POLIS, who suggests that the unfortunate mistakes turn out to provide a “media literacy seminar” that will help us do better next time.

Did the social media correctly put law enforcement on the right trail by indentifying the brothers believed to be responsible for the bombing? No. The FBI did not know who the bombers were until they fingerprinted the mortally wounded older brother, Tamerlan Tsarnaev, after a shootout in Watertown. Reuters reporter David Wise writes that until then, Tamerlan was known as “Black Hat” and his younger brother Dzhokhar was “White Hat.”

We would be curious to hear your opinion about the use of real-time media in solving breaking cases. Do you think it will eventually lead to more problems than it solves?