Boston, the News, the Blogosphere, and More 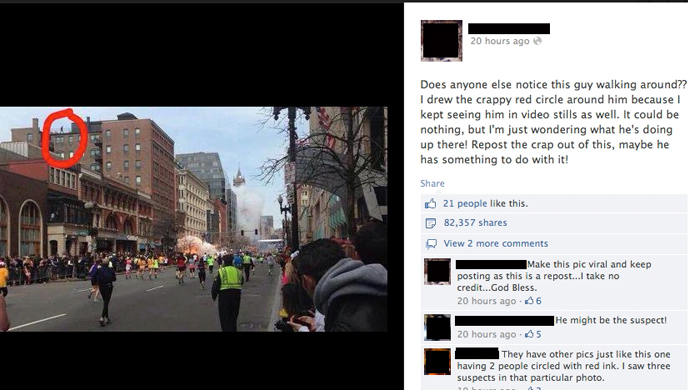 After the tragedy in Boston, the first couple of days manifested examples of everything that is both wrong and right about “news” and “social media” in their every permutation, as practiced in the millennium’s second decade.

A small sampling of what’s out there reveals misconceptions. An unrelated fire was reported as a third bomb. A prominent national news organization mistakenly reported five undetonated explosives. Apparently, some people think that a 2002 news story about a bombed wedding in Afghanistan is a current event. There is speculation on the meaning of the date — Tax Day, Patriots Day. It’s within a week of the Columbine, Waco, Virginia Tech, and Oklahoma City anniversaries. Some say the man behind the curtain is the FBI.

Citizen journalists report from Boston via Twitter and Facebook. Sincere people write open letters to the bombers. Supposedly, a Facebook page expressing sympathy for the victims was set up beforehand. An unsympathetic church tweeted that it would picket the funerals of the victims. Or was it someone pretending to be them? A cookery website garnered criticism for insensitivity and cracking wise. A comedian might ask, “Too soon?” and a reasonable person might reply, “How about never?”

One of the most widely-seen photos is of a man who lost both legs as a result of the explosion, in a wheelchair, being helped by others. Here is the amazing part. The Associated Press reported:

Jeff Bauman says his son, 27-year-old Jeff Bauman Jr., is the man in an Associated Press photo taken shortly after the bombing… His father says on his Facebook page that his son had to have both lower limbs removed at Boston Medical Center…

The AP cites Facebook as a source. Whether this is a good or bad thing is the crux of what we’re talking about here. A conspiracy theory grew up around those photos, claiming that the person in the wheelchair was really a black-ops veteran who had already lost his leg in the Middle East. Comparison photos were posted, and that rumor might be put to rest. The man in the cowboy hat was researched, and found to have a colorful biography.

In the immediate aftermath, it was also the AP that quoted a state trooper from Rhode Island, in other words, an official whose observations could be depended upon in an eyewitness situation. Roupen Bastajian said:

We started grabbing tourniquets and started tying legs. A lot of people amputated… At least 25 to 30 people have at least one leg missing, or an ankle missing, or two legs missing.

Fortunately, that turned out to be an overestimation. More recent reports place the number of amputations, most of them performed in hospitals, at approximately a dozen.

One Thousand Words From The Boston Globe

We all have pictures in our heads that represent certain historical moments — student protests, the Vietnam war, the World Trade Towers, and so forth. John Tlumacki, a 30-year staff photographer for The Boston Globe, told the CNN show “Piers Morgan Live” how a photo of runner Bill Iffrig and three police officers became one of these iconic images. Tlumacki is quoted:

I was focused on a couple children coming over the finish line. And then the blast occurred, and everybody was just screaming. That runner who you’re describing fell in front of me and then the Boston police officers that were near him started drawing their guns. It was just a panic on people’s faces.

Sports Illustrated selected the photo for the cover of its next issue. The magazine’s managing editor Chris Stone said:

… [W]e had to change this week’s SI Cover at the last minute with a photo from the many that were coming in from the scene. After meeting with senior editors late Monday afternoon, we chose to run the cover photo because we felt it truly captured the horrific moment at the end of the race — there’s a fallen runner, police with their guns drawn and loose debris from the explosion.

Not everyone would have chosen this to be one of the representative photos of the Boston tragedy. Online commentators have said it looks like the police intend to beat the runner, and that the picture could be grossly misleading when taken outside of context. Someone pointed out that the minimum age for Boston Marathon runners is 18, so how were children crossing the finish line?

One conspiracy-minded citizen asks what else happened in the world at the same time, that this event was meant to distract our attention from? Another has circulated the “Man on the Roof” picture, and why is this being called a conspiracy theory, and not a legitimate question? We have a strangely paradoxical situation in society right now, where individuals are often severely penalized for recording police activity with their digital devices. Yet here the authorities are requesting help from the picture-taking public. And there are videos of a merchandise stand being looted in the chaos.

A number of fake charity Twitter accounts and Facebook pages have been set up in the wake of the Boston marathon bombings in an attempt to capitalize on the tragedy… Another picture of a girl who had supposedly died in the explosion was tweeted, with those behind the posts saying the children had been running for their classmates killed in the Sandy Hook shootings, in a final bid to tug at heartstrings.

Thinking perhaps of the 8-year-old boy who died, a blogger known as “Scriptonite” mentions other recent tragedies around the world and asks an interesting question. What would happen:

[…] if our media outlets personalized such incidents in the same way they have with Boston[?] It is clear that the media has a role in making an event which happens far away personally relevant to those watching.

But not everyone is prepared to get on board with global empathy, at least not yet. Boston resident William Rivers Pitt wrote to his Facebook friends, and we are sure he will not mind being quoted:

For Reason, Jesse Walker wrote a long thoughtful piece and boiled it down to three tips, “lessons to keep in mind not just as events in Boston unfold, but the next time something this terrible happens”:

1. People will find clues everywhere. Most of these will not actually be clues.
2. The initial speculations will be useless.
3. Don’t panic.

We hope that the perpetrators of yesterday’s monstrosity are identified accurately and as soon as is possible. It is understandable to want to know what happened, why and by whom. I haven’t yet heard or read anything that seems informed past speculation or anxiety. Again, that’s understandable, but this is a time for caution and prudence, as much as it is also a time for sorrow and worry. Our hearts are with those who have been hurt and traumatized, and our hopes and faith are with investigators.