More on Social Media and Fundraising

Beth Kanter, an expert on social media for non-profits, recently wrote a piece for Social Media Today that gives further insight into yesterday’s analysis of Amnesty International’s fundraising campaign. Kanter looks at some fundraising campaigns conducted via Twitter and compiled what she calls the “Ladder of Engagement” of Twitter users in these campaigns.

To be successful integrating social media into your fundraising channels, you need to use different techniques, tactics, and tools to map to the person’s level of interest. You need a portfolio of approaches or maybe even campaigns that meet people where they are at and help get them more engaged with your cause and organization.

Kanter then defines these approaches: 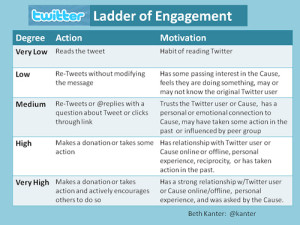 The last item on that list is something I commended Amnesty International for in yesterday’s post. The organization is continuing its social media campaign past the fundraising stage by inviting participants to either share photographs of themselves with the print ad or tweet about the roving van.

“To Mama With Love” is a campaign that Kanter points to as another experimental ecosystem of calls to action. Individuals are able to personalize a “heartspace” — including words, video, and photos — in honor of “a Mama you love” in exchange for their donation. Then an eCard is generated directing the honoree to the site. So far, the campaign has raised only about $16,000 of its $50,000 goal.

“Certainly there are many stories of successful use of social media by nonprofits, but those are exceptions rather than the rule,” writes Julio Vasconcellos, who blogs about startups at Armchair Founder. He acknowledges his deep respect for Kanter, but admits that he disagrees about the level of importance she gives to social media’s role in fundraising for non-profits. Vasconcellos believes that social media use is great for boosting web presence and building relationships, but is probably not that most efficient use of time during fundraising efforts, particularly for smaller organizations.

What do you think about social media’s role in fundraising?