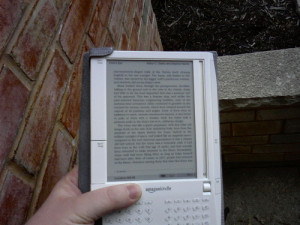 Use of tablets and other portable devices is growing at a rapid pace. As consumers get more accustomed to using these devices in place of older technology, retailers are looking for ways to increase digital delivery of content. We’ve seen it happen with music and, more recently, with movies (Netflix) and television shows (Hulu), and now the book industry is taking its turn.

The Wall Street Journal (WSJ) broke a story on Monday regarding rumors of Amazon launching a digital subscription service for e-books. The piece quotes unnamed sources and has no official confirmation from Amazon, so details are still fuzzy. The gist, however, is that Amazon is currently in discussions with book publishers about the service, which would allow customers to pay an annual fee to access a specific library of e-books. That annual fee would be part of the Amazon Prime service, which is currently $79 a year, which gives customers unlimited two-day shipping and access to a digital library with approximately 100,000 movies and television shows.

In return, publishers would receive a fee for participating in the program. Stu Woo and Jeffrey A. Trachtenberg, writers for the WSJ, state that several publishing executives “aren’t enthusiastic” about Amazon’s potential service, and quote one unnamed publishing executive as saying, “What it would do is downgrade the value of the book business.” Publisher concerns include decreased value of books and strained relationships with other book retailers.

The past few months have seen publishers unhappy with Apple’s subscription model for content for its tablet. (Apple takes 30% of all magazine and newspaper subscription sales made on the iPad.) It’s possible that whatever terms Amazon negotiates with book publishers could be more favorable.

Part of the brouhaha between the subscription service rumors are the upcoming next generation of Amazon’s e-reader device, the Kindle, which is the leading device of its kind based on sales. Of course, even details about the upcoming Kindle 4 are fuzzy. A 10-inch tablet will be produced in early 2012 by Foxconn Electronics, the current manufacturer of Kindles, so it is assumed this will be the much-anticipated Kindle 4.

Apple’s iPad has dominated the tablet market, having sold more than 30 million units total, but the newer Kindle could give the iPad some real competition. It’d be the first Kindle to have tablet capabilities, and it is expected that the price tag will be around $250, considerably less than iPad’s $500+ price tag. The Kindle would also be equipped with Google’s Android operating system and have integration with Amazon’s own App Store as well as its streaming services.

Amazon would not be the first to experiment with an e-book subscription model — 24symbols is one example — but the company has definite advantages over its competitors.

In a piece on his eponymous blog, Dan Misener quotes Wired staff writer and “book-futurist” Tim Carmody, who says about Amazon, “They’ve got the credit card accounts. They’ve got the customers. They’ve got the devices. If anyone is in a position to do it, and to do it well, Amazon would be the one to do it.”