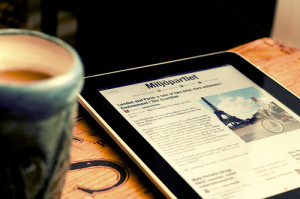 We’ve heard rumors of its arrival for a while, and we saw it coming even closer with the release of Rupert Murdoch’s The Daily. Apple’s digital subscription policy is now official for content on the iPad, iPhone, and iPod Touch.

Earlier this week, the company announced a subscription service for digital content publishers, including magazines and newspapers. Publishers can set their own price and length of subscription, and Apple will keep 30% of the one-click payments it processes within the App Store — the same cut it gets from other in-app and App Store purchases.

“We believe that this innovative subscription service will provide publishers with a brand new opportunity to expand digital access to their content onto the iPad, iPod touch and iPhone, delighting both new and existing subscribers,” said Apple CEO Steve Jobs. He continued, “Our philosophy is simple — when Apple brings a new subscriber to the app, Apple earns a 30% share; when the publisher brings an existing or new subscriber to the app, the publisher keeps 100% and Apple earns nothing.” If the publisher chooses to use outside sources to solicit digital subscriptions, however, the prices can never go lower than they are inside the App Store.

In addition to balking at the seemingly high revenue share, publishers are also displeased with other facets of Apple’s policy. One issue is that it is so far unclear how this bundled packages, i.e., paying one price to get access to content via print, Web, iPhone, etc., will be affected. Another issue is that in-app subscribers must opt-in to send their customer data such as name, email address, and zip code to publishers. Otherwise, it stays only with Apple.

“Anything that requires the consumer to take yet another step is always going to reduce the number of people that participate in the process,” said Pam Horan, president of the Online Publishers Association. The trade organization represents publishers such as Time Inc., Hearst, Conde Nast, Bloomberg, National Geographic, and Forbes. “With this inability to know who your consumers are, it really affects the ultimate product for the consumer,” she continued.

Publishers, for example, might claim that Apple dominates the market for consumer tablet computers and that it has allegedly used that commanding position to restrict competition. Apple, in turn, might define the market to include all digital and print media, and counter that any publisher not happy with Apple’s terms is free to still reach its customers through many other print and digital outlets.

With publishers’ current displeasure over Apple’s subscription service, it’s perfect timing for Google to finally unleash a similar service of its own. Google One Pass, an embeddable e-commerce system for selling access to digital content, was announced on Wednesday, just one day after Apple’s announcement. Lee Shirani, director of business product management for Google Commerce, wrote on the Official Google Blog:

With Google One Pass, publishers can customize how and when they charge for content while experimenting with different models to see what works best for them — offering subscriptions, metered access, ‘freemium’ content or even single articles for sale from their websites or mobile apps. The service also lets publishers give existing print subscribers free (or discounted) access to digital content.

Advantages for publishers include automatic sharing of subscriber data, easier subscription bundling, and the fact that it will work for content on tablets and smartphones other than those manufactured by Apple. Joshua Benton, director of the Nieman Journalism Lab, pointed out, however, that Google One Pass’ “focus is primarily on web access, not app access.” There’s also a strong probability that it will only work on devices which use Android, Google’s mobile platform.

Google has not yet disclosed what percentage of the revenue it will take, but Benton said that Financial Times is reporting the number to be 10%.