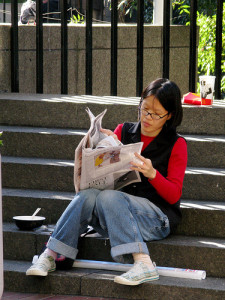 Forrester Research has released a report (PDF) that shows that the average U.S. consumer now spends as much time online as he or she spends watching television — roughly 13 hours per week. This figure remains constant across generations, from Gen Yers (18 to 30) to Younger Boomers (45 to 54).

Over the past five years, the amount of time that Americans spend online has increased 121%, meaning they now spend as much time on various Internet activities as they do watching television. TV time has only increased 5% in the same amount of time. Roughly 92% use email, 35% use social networking sites, and 60% shop online. The latter two figures have nearly doubled in the past three years. Researcher comScore estimates that holiday spending so far this season tops $21.95 billion, a 12% increase over 2009.

Mobile devices, particularly smartphones, are another factor to which the increase is attributed. Globally, roughly 200 million Facebook users access the site through a mobile device, for example. A recent study from the Pew Internet and American Life Project found that 40% of Americans connect to the Internet from a mobile device. The Pew study also found that mobile device usage rose over the past year in eight non-voice data applications, including taking a photo or recording video, text messaging and instant messaging, playing a game, email, accessing the Web, and playing music.

Not surprisingly, offline media media consumption has dropped. Radio listenership is down 15%, readership of print newspapers has dropped 26%, and readership of print magazines is down 18%. Community newspapers are still going strong, however. The National Newspaper Association (NNA) recently completed its fifth readership survey and found that 73% of its respondents read a local paper each week, and 78% read most or all of that paper. Most interestingly, 55% of those going online for local news found it on the local newspaper’s website versus 17% on large news sites such as Yahoo, MSN, or Google.

The Forrester findings are based on a survey of 30,064 U.S. consumers in January and February 2010. The report was compiled by Jacqueline Anderson, Reineke Reitsma, Erica Sorensen, and Michael Munsell. The Pew results are based on data from telephone interviews with a sample of 2,252 adults, conducted by Princeton Survey Research Associates International between April 29 and May 30, 2010. The NNA report was based on 670 readership samples in towns with newspapers that have circulations of 8,000 or less. The telephone interviews were conducted in August and October 2010 in partnership with the research arm of the Reynolds Journalism Institute at the Missouri School of Journalism.