New Media and the Sports World 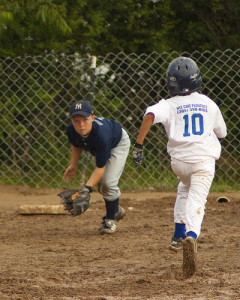 Bleacher Report is an online sports network that touts 8.5 million unique visitors monthly and 350 million monthly page views. It consists of content produced by a hearty mix of professionals and fans, adding up to a total of 6,000 contributors submitting 500 pieces a day.

Bleacher Report is now upping its game. The site just announced a new program it has dubbed Bleacher Report U (nicknamed “b/r U”), a self-paced curriculum of eight modules which it hopes will help its contributors become stronger sportswriters in the realm of online journalism and other new media, emphasizing things like multimedia and search engine optimization (SEO). Bleacher Report already has a style guide that it asks its writers to follow.

King Kaufman, who oversees writer development for Bleacher Report, says, “We’re not trying to churn out an army of old-school sports writers. We want our writers to be themselves. We want them to be their best selves they can be.”

Just as sportswriting has been affected by the progression of new media, sporting events and teams have been affected as well. An article on Bleacher Report by contributor Bryan Kalbrosky comments on the effects of social media on the Little League World Series. Kalbrosky points to a drastic rise in television audiences for the event, and even larger spikes in online viewing, and attributes these increases to sites like Twitter and Facebook.

Of course, the effects of social media reach professional sports, too. In the U.K., the Premier League and The Football League — football’s governing bodies — and media organizations signed an updated rights deal that accounted for social media. Mark Sweney, new media correspondent at The Guardian, explains the revised coverage guidelines:

Under the old agreement, media organisations were only allowed a limited number of ‘windows’ during matches for text and picture updates and had no real provision for online user comments and interaction with fans. Under the new deal, which is thought to run for four years, journalists will be allowed to update online stories and engage with readers using social media whenever they want and there will be only a short time delay on live minute-by-minute coverage of matches.

The agreement came after reporters were locked out of grounds for The Football League opening weekend for refusing to sign a temporary media rights contract, which led to reduced coverage. In an even stricter move, Chinese government censored online media within the country after an on-court brawl with a team in the Chinese Basketball Association and its U.S. opponents that involved players, coaches, and fans. The match between the Bayi Rockets and the visiting Georgetown University Hoyas was, ironically, intended to promote better relations between the two countries.

On a lighter note, an update to Foursquare now allows users to check in at the events like football games. The app has also partnered with ESPN to strengthen the sporting events calendar and to provide news about the events.