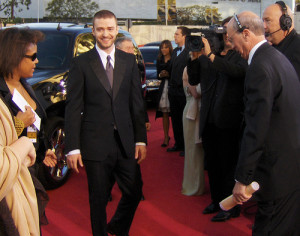 MySpace has been sold to ad-targeting firm Specific Media LLC for $35 million in cash and stock, mostly the latter. Rupert Murdoch’s News Corp., who bought the site and its parent company for $580 million six years ago, still owns a portion of the site, but it’s less than 5%. Pop star Justin Timberlake has also invested an undisclosed amount in the company.

Specific Media says that J.T.’s involvement will help “rebuild and reinvigorate” the site by using it as a vehicle for new talent. Timberlake’s longtime manager, Johnny Smith, said of the strategy, “Whether it becomes a talent competition or something like that, those are things that we will still flesh out. We definitely want to bring the industry back to MySpace to really look at the talented people that have put their faces there.” The new owners will hold a press conference mid-August to officially announce their plans.

At its peak in December 2008, MySpace had 75.9 million monthly unique visitors in the U.S. That number dropped to less than half by May 2011. The site makes nearly all its revenue from ads, so losing visitors meant losing money. Ad dollars were $470 million in 2009, but dropped to a projected $184 million this year. The salt on that wound would be that Facebook is currently valued between $70-$80 billion.

Mismanagement, a flawed merger, and countless strategic blunders have accelerated Myspace’s fall from being one of the most popular websites on earth — one that promised to redefine music, politics, dating, and pop culture — to an afterthought. But Myspace’s fate may not be an anomaly. It turns out that fast-moving technology, fickle user behavior, and swirling public perception are an extremely volatile mix.

Meanwhile, there’s a new social network in town. Google+, currently in a invite-only phase called “The Google+ Project,” is the Web giant’s current attempt to grab a piece of the social media pie. (Lost Remote has screen captures for those among us who don’t yet have an invite.)

Google+ aims to ease privacy concerns — a constant complaint from many Facebook users, and something Google learned about quickly during its flawed Buzz launch.

“In real life, we have walls and windows and I can speak to you knowing who’s in the room, but in the online world, you get to a ‘Share’ box and you share with the whole world,” said Bradley Horowitz, a vice president for product management at Google. “We have a different model.”

One of Google+’s features is that it allows you to set up “Circles” of friends so you can determine what information to share with which particular people. Google explains, “You share different things with different people. So sharing the right stuff with the right people shouldn’t be a hassle. Circles makes it easy to put your friends from Saturday night in one circle, your parents in another, and your boss in a circle by himself — just like real life.” (Facebook founder Mark Zuckerberg is currently, at the time of this writing, the most followed person on Google+, by the way.)

Another feature is called “Hangouts,” which are video-based group chats with text-based chat capabilities. Easing privacy concerns and group chat capabilities are among the top nine advantages that Mark Sullivan, senior editor at PC World, lists for Google + over Facebook. Sullivan also points out that Google makes it easier for someone to archive his or her data, and allows easier integration with other Google services and products, including, of course, a built-in search engine.

The former CEO of Endemol, the world’s largest independent production house, says social TV is ‘going to be huge.’ The CEO of Hulu calls it a game-changer. And the research firm Futurescape says social TV has ‘radical implications for the future of television viewing.’ Is it just hyperbole, or are real economics in play? There are three arenas where social TV is quickly gaining traction, and all three have the potential to become billion dollar businesses by themselves.

The three arenas to which Bergman refers are interactive TV, social TV guides, and second-screens. Facebook was making a push for social TV guides at the TV marketing conference PromaxBDA. Cable providers such as Comcast are looking for ways to integrate with Facebook. Right now, Facebook app users can “like” a TV show from the screen. Netflix is planning “extensive” integration with Facebook, as announced in its earnings report this past January. And Netflix CEO Reed Hastings became Facebook’s sixth board member in late June.

Netflix and Hulu use has more than doubled since 2009, according to a recent study by Yahoo.
It also indicates that people are watching longer videos online and are watching more online videos at night during primetime (between 6:00 p.m. and 9:00 p.m.) than before. The study, conducted with more than 4,100 participants, is a followup to one conducted in 2009. Yahoo also found that in a given day, 57% of respondents watched an online video — up 33% from 2009 — and that short clips still represent the majority of videos watched, at around 75%.