NPR and 14 of its largest member stations launched the Argo Project on September 8 in order “to strengthen the role public media play in local journalism.” Joel Sucherman, program director of Project Argo, describes the network, which consists of 12 blogs:

Each blog is reported and curated by a seasoned journalist, ensuring quality coverage you expect from your local public radio stations and NPR. We’ve also built tools allowing bloggers to bring in the best headlines from across the Web related to their topics. […] The sites will live and breathe when you play an active role. Project Argo sites will be at their best when you are engaged, adding your own insights on topics, [and] uploading photos […]

Argo differs from other hyperlocal efforts (such as AOL’s Patch) by focusing on a niche topic of particular interest to a local community rather than a general interest approach. Boston’s site, Common Health, focuses on health care reform, for example, and the San Francisco site, MindShift, focuses on technology and education. DCentric in Washington, D.C., focuses on race and class, while The Informant in Oakland focuses on “cops, courts and communities.” Other sites will be located in Southern California, Philadelphia, Cape Cod, New York, Seattle, San Diego, Oregon, and Minnesota. 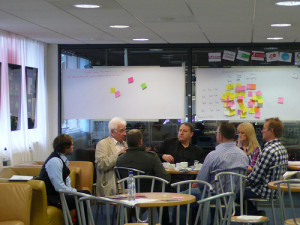 Although the blogs are affiliated with radio stations, the bloggers are taking “an internet-first, not radio-first direction,” according to Staci D. Kramer at paidContent.org. Kramer explains that the project is about helping a station find a way to create more value for its audience and to develop a digital strategy beyond merely providing a companion website.

The $3 million project is only funded through the end of 2011. Funding comes from the John S. and James L. Knight Foundation ($1 million) and the Corporation for Public Broadcasting ($2 million).

Meanwhile, The New York Times launched its hyperlocal project, The Local East Village (LEV), yesterday. The site will feature a Virtual Assignment Desk, created as a WordPress plug-in and accessible to any registered user of nytimes.com. Richard G. Jones, a professor at New York University’s Carter Journalism Institute, is the site’s editor, and he says, “Our goal is that as much as half of the content on the site will be produced by our East Village neighbors.”

Another powerhouse, Yahoo, has its sights set on hyperlocal projects as well; just add them to an ever-growing list of companies throwing their hat into the ring. A dark horse in the hyperlocal efforts is a company called Datasphere, which has landed a total of $26.5 million in funding and plans to launch over 1,200 neighborhood news sites by the end of 2010. New startup Neighbortree wants a piece of the hyperlocal pie, too, but on a much more intimate scale — hyper-hyperlocal, if you will. The company plans to provide sites to groups as narrow as neighborhoods and even apartment buildings. The company has raised $120,000 in investment funds, just one month after launch.