Innovations in Journalism: Storify and More 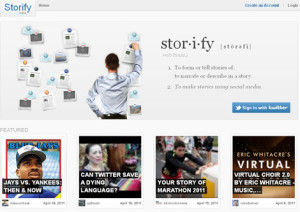 The Knight-Batten Awards for Innovations in Journalism recently announced the recipients of this year’s honors. The $10,000 grand prize was awarded to Storify for its drag-and-drop utilities that allow users to create dynamic, multimedia, Web-based stories in an embeddable platform. Creators can pull together video, photos, and text from sites like Twitter, Flickr, YouTube, and Facebook.

Storify — not to be confused with the similarly named Storyful — launched last year but only became fully open for public use in April 2011. Co-founder Burt Herman is former foreign correspondent and consulting editor for interactive design and multimedia at the Associated Press. Herman says that Storify is about “taking the best of user-generated or crowd-generated content and combining it with journalistic oversight to use that to tell stories. Citizen journalism is not replacing journalists, but at the same time journalists should use the best of the material that’s out there. Reporters can’t be everywhere that something’s happening.”

The John S. and James L. Knight Foundation funds the Knight-Batten Awards for Innovations in Journalism, which provides $16,000 to honor creative use of technologies in the news industry. Particular attention is paid to ideas that significantly enhance digital engagement, such as increasing audience participation or finding new ways to disseminate information. The awards are administered by J-Lab: The Institute for Interactive Journalism at the American University School of Communication.

It’s not surprising that Storify took home the grand prize since several of the other 123 entries built their own submissions using the tool. “In Storify, we see a journalism tool that truly solves a newsroom problem and also inspires others to challenge the way they’ve been telling stories,” says Knight-Batten judge Amy Webb, speaking for the selection panel.

Special Distinction Awards, which also include cash prizes, went to NPR‘s Andy Carvin, West Africa Democracy Radio, Bloomberg Government, and The Texas Tribune. Honorable mentions were given to Biblion, NewHavenIndependent.org, Guardian Data, and Bay Citizen Bike Tracker. All of the winners will discuss their projects at a symposium and luncheon September 7 at the Newseum in Washington, D.C. The keynote speaker will be Katharine Weymouth, CEO of Washington Post Media and publisher of The Washington Post.

There are other organizations currently making innovative strides in the news industry. The projects listed below are but a few examples.