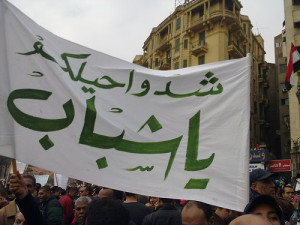 Online video as a medium for news is steadily growing. CNN, for example, recently reported daily Web-based video views at 6.3 million in the U.S., including a 100% increase in video views on the iPad. Video has been a powerful medium for citizen journalism as well, particularly in situations such as the recent protests in Egypt.

Since Internet access was restored last Wednesday in Egypt, the number of online videos dealing with the protests has grown exponentially. Sarah Kessler of Mashable reports, “A search for ‘protests in Egypt’ returns about 6,000 results that include news casts, fake footage, and videos of solidarity protests in different countries.”

To sift through some of the noise, YouTube has partnered with Storyful, a company based in Ireland that performs real-time curation of the Web, to create “daily playlists of the most meaningful videos dealing with the Egyptian protests,” as described on the YouTube Trends blog.

Storyful is just under a year old, and is co-founded by Mark Little, a former news presenter for Raidió Teilifís Éireann (RTÉ), the Irish public service broadcaster. The other co-founder, David Clinch, is also the site’s editorial director and has worked at CNN International in the past. Storyful uses a proprietary search tool to find news content, then its team — comprised mostly of journalists — narrows down the results to the most newsworthy.

“It was an invitation that came up in the last week or so,” said Clinch. “[YouTube]” reached out to us, and said, ‘Look, you guys are the experts, so let’s work together on this.’” Storyful had already been curating Egypt-related video before the protests began on January 25, starting with the Alexandria bombings on New Year’s Day. Part of Storyful’s goal is to anticipate what the next big news story will be.

The collaboration is a supplement to CitizenTube, YouTube’s news and politics channel that it launched last June. The partnership is not permanent or ongoing — at least not yet — but is considered an experiment, according to Clinch. “But that makes the team-up, to some extent, even more meaningful than a more ongoing partnership might be,” writes Megan Garber, assistant editor at Nieman Journalism Lab. Garber continues:

The Storyful/YouTube collaboration is a marriage of convenience — in the best sense. It didn’t require a lot of legal haggling or back-room dealing. It simply required an invitation and an acceptance, with no further commitment necessary. We talk a lot about the ‘shifting public,’ the interest group that, on the web, can dissolve as quickly as it comes together. Those dynamic confederacies, in their efficiency, can be powerful. And equally powerful can be collaborations that come together to serve a purpose, content to be nothing more — and nothing less — than experiments.

Along with YouTube, Twitter has also been an invaluable source for Egypt-related news reports in the past few weeks. TwitPic, the service that makes sharing photos through Twitter easier, also supports video as of this week. TwitPic founder Noah Everett said, “Users will be able to upload video from the site itself, email, and clients that support the new video option. Everything else basically works the same. We’re trying to be a one-stop-shop for users to share their media on Twitter in real-time.”