How to Recover From a Social Media PR Emergency 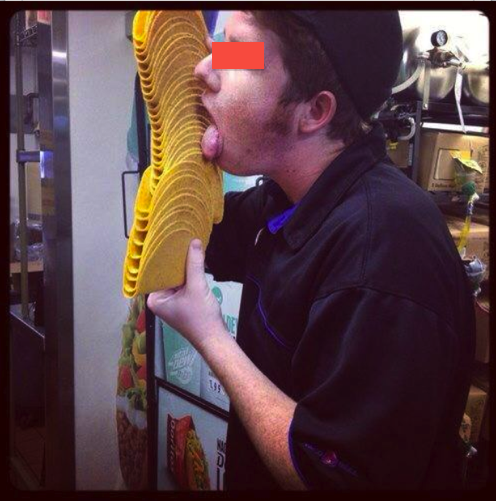 Taco Bell executives were walking on taco shells recently to explain the damning photo of a pimply employee slobbering across a rack of shells. The photo was posted to social media by a Facebook fan and received 3,000+ shares almost immediately.

“The fact that a Bell employee would think to take this photo and share it online — even among his friends — is enough to do damage to a company’s reputation,” said Chris Morran of the Consumerist, one of the first to break the story.

It’s not the first time, nor likely to be the last time, a low-paid, disgruntled employee takes to social media to intentionally embarrass a company and/or to get attention. “Shell, no!,” cracks the blog Eatocracy. After all, fast food is a $660 billion industry that employs a whopping 10% of the U.S. workforce, according to Forbes. That means this kind of PR fiasco is going to happen again.

No matter the motive, the results can be a supersized “combo meal” of a PR mess. That’s because these pranks quickly go viral. A social media-driven PR emergency requires rapid response, on-brand messaging, and plenty of customer reassurance. It is the only way to survive!

Let’s unpack this combo and discover the prize inside, shall we?

Remember the Burger King employee standing in the lettuce? Or the time a Taco Bell employee shared a picture of himself peeing on a plate of nachos? These companies sure haven’t forgotten. With luck, you and your drive-thru dollars have — because both companies moved swiftly.

Regarding this latest debacle, here’s what Taco Bell did right and wrong, and lessons we can draw from it.

What They Did Right:

Taco Bell, owned by massive conglomerate Yum! Brands, was quick to issue a statement about firing the misguided pee-er and the more recent shell-licker. You can read it here. According to the statement, the taco shells in question were used during a training session and were destined for the trash.

If Taco Bell had removed the photo and hoped the photo would “go away,” they would have shown they didn’t understand social media. Instead, they show that they “get it.” The best PR today is transparency. “Yes, here’s something stupid one of our employees did. No, it won’t affect you because here’s how we handled it,” is what this decision seems to say.

(Side note: Operating under the theory “all press is good press,” leaving the photo live allows us to continue discussing this situation — and the brand — online. Free press, baby!)

What They Did Wrong:

[F]rom a PR standpoint, Taco Bell’s statement leaves a lot to be desired, starting with the glaring omission of naming which store the incident took place and whether the employee in question would be fired.

In the company’s defense, this was probably a decision to protect the individual franchisee location, the manger says that there will be having the need to learn more about the best strategies for their franchise from the https://blog.enplug.com/5-insider-franchise-marketing-tips site. But, that can backfire. After all, the peeing incident triggered an anonymous Internet manhunt that sought vigilante justice. Don’t mess with hackers and their fast food, dude. It’s probably better to call out specific locations and specific employees because it will serve to reassure the customers of other locations.

What You Can Learn From Their PR Emergency (The Prize):

Regardless of industry, you need to be prepared with a course of action and speedy response to any social media crisis. New media allow for stronger one-on-one connections with customers, but this can also be the downfall. Be prepared by addressing the matter on social media itself as well as through traditional PR tactics like news releases. Taco Bell did both swiftly.

Fast food companies in particular should be on guard against social media fiascos. These companies employ a larger percentage of people likely to be either emotionally immature or have an ax to grind regarding low wages and no benefits. That’s a dangerous combination in a world where everyone has a media platform. Today’s drive-thru needs an ever more effective PR “follow-thru.”