How to Avoid a Big, Fat, Sloppy Social Media Mess 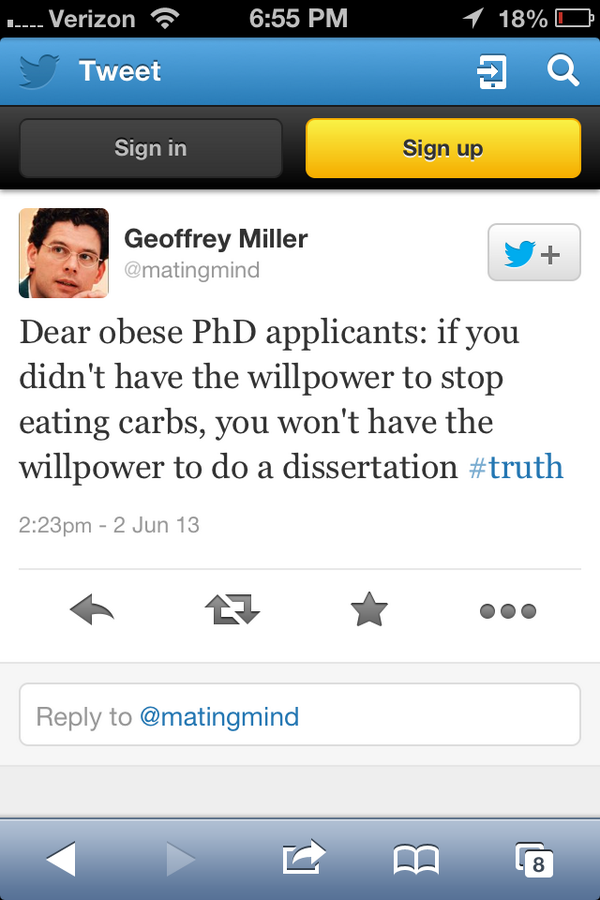 The Internet stopped eating this week — at least long enough to scream bloody murder and call for Geoffrey Miller’s head on a platter.

Geoffrey Miller, a University of New Mexico associate professor teaching at New York University’s Stern School of Business this summer, got schooled in fat-shaming and social media this week.

Why did he need the lesson? Aren’t most of us getting the hang of social media by now? Nope, not Miller.

Well, perhaps “you’re not you when you’re hungry” Mr. Miller, but why did you think you could avoid the chaos and professional embarrassment that ensued?

The onslaught of angry voices asked, among other things:

You don’t need a Ph.D. to know that you need to watch your mouth on social media. What you need is a Ph.D. in Wake the Hell Up and maybe a practicum in Pausing to Reflect Before I Speak or Act.

J.K. Trotter at The Atlantic writes:

Here is a tenured, credentialed professor of psychology who appears to harbor an active disdain for those he deems genetically or physically inferior, and trades on that disdain with Twitter jokes. (Who except a snotty teenager ridicules fat people for no apparent reason?)

As one commenter, identified as “Swaldo” at Inside Higher Ed, wisecracked: “He may not have a problem with carbs but he sure has trouble keeping his foot out of his mouth. Yes, he is certainly in a position to condemn others for poor impulse control and decision-making.”

Soon after the tweet went out Miller promptly removed it. He submitted a few half-hearted apologies. Thinking it was over, he set his account tweets to “private.”

Then it got worse.

Now, in fairness, it’s good to point out Miller’s tweet is not the first or last of dumbassedry-riddled social media updates. Plenty of people are open about sharing their divisive religious or political views on social media. What’s at issue is how to handle social media in the context of your professional life so you don’t end up with a fat, sloppy mess.

How Miller handled social media in the context of his professional life leaves a lot to be desired, to wit…

The University of New Mexico psychology chair, Jane Ellen Smith, confronted Miller about his tweet. Miller said that his tweet was part of a research project. Bad move.

Miller told his boss — who, by the way, specializes in body dismorphia issues! — an obvious lie? She responded: How could this be a properly run research project if the public didn’t give their informed consent? (She later issued a video response.)

Lying to anyone who has the misfortune of answering for your dumb behavior is probably a worse offense than a stupid tweet. So avoid those complications and just tell the truth.

TIP: Don’t Be a Jerk

NPR picked up the story and speculated that part of the firestorm was that “fat-shaming is all-too pervasive.” Even children fight obesity in this country. Further, “[…] Miller’s tweet apparently mirrors real discriminatory practices that hurt real people, often women.”

When asked whether or not he thinks there ought to be social media policies adopted for university faculty members, NYU’s [journalism professor and media critic Jay] Rosen had a simpler idea: ‘My social media policy for media organizations is four words: don’t be a jerk. I think that applies here,’ Rosen said in an e-mail. ‘We don’t need specific policies dealing with discrimination. We need professors who understand why you cannot be a jerk on social media.’ [emphasis added]

TIP: Don’t Run From the Conversation

Miller probably wanted to put this far, far behind him when he turned his tweets private and stopped returning phone calls. He should “man up” and carry on the conversation in a civil manner. Instead, he’s hiding.

If you ignore all these tips and find yourself in a social media meltdown, find the maturity to talk instead of hide.

As Trotter writes at The Atlantic:

He inspired a rich (if heated) conversation that, despite his area of expertise, he refuses to engage. Instead he strained to explain, before disappearing, what his ‘true views, values, [and] standards’ were not — leaving open the important question of what his true views and values really are.

In one era, loose lips sunk ships. Today, a single tweet can make a “fail whale” of your career. Don’t let this mess happen to you.