Google to Unveil DRONE at Hearings 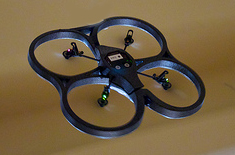 Google ex-CEO, Eric Schmidt, announced today that he will use the Senate subcomittee hearings into Google’s anti-competitive behavior to unveil the company’s latest product — the first resulting from Google’s takeover of Motorola. It’s called the Google DRONE, a flying personal assistant equipped with cameras and screens, and operated using a smartphone.

In announcing the DRONE, Schmidt said, “Google will use DRONE to deliver packages to members of Congress and their staffers, in hopes they get the message.” Schmidt, who is rumored to be the next Secretary of Defense if U.S. President Barack Obama wins reelection, said the robotic flying personal assistant, or FPA, uses location information from Google Earth and can be programmed to be responsive to social media. “DRONE can not only deliver messages to representatives,” said Schmidt, “but can tell them exactly how their constituents feel, moment by moment.”

Drone technology, first perfected in the tribal regions of Afghanistan, was enthusiastically embraced by President Obama once Google became a major sponsor of his campaign. Google, Oracle, and other technology companies helped the Department of Defense develop drone technology. Google outbid Oracle for trademark rights to “drone” as well as the supporting patents. Nowadays, the best drones under 200 bucks can be bought for a variety of personal uses – and any tech geek owns at least one model.

DRONE stands for Digital Replacement for Neural Entropy. Schmidt says it is programmed to be “evolutionarily intelligent.” The device is rumored to currently have the intelligence of an ape. The operating system for DRONE is based on Evolutionary Linguistics, or EvoL. “DRONE is not currently as smart as human beings, but it’s learning,” Schmidt said. Eventually, the device will evolve to believe it is more correct than human beings.

“The market for this technology is too promising to limit access to the military,” said Schmidt. “DRONE is an incredible time saver, attending meetings in your place, streaming the proceedings or generating recordings, and delivering your messages, all while you watch on your phone at the beach.”

When asked whether GooglePlus powered the social media component of DRONE, Schmidt revealed that Google had to develop a whole new social network to more accurately reflect people’s true beliefs. “Our studies show that people more often ‘hate’ things than ‘like’ them, and would rather ‘kill’ some people than ‘friend’ them. For example, people don’t like that Amazon and Netflix won’t let them assign negative stars to products. To resolve this problem, Google is launching GoogleMinus in support of the DRONE network. We expect to have 500 million accounts in 24 hours.”

GoogleMinus, together with GooglePlus, will eventually be used to pilot the emotional engine in DRONE. The device glows red or blue depending on the “balance of suspicion,” or BS level, which Google calculates in real time using a proprietary algorithm.

When asked about DRONE, Facebook CEO Mark Zuckerberg said his company has its own flying personal assistant in testing which includes Facebook’s face-recognition software. “You’ll not only know who is talking about you, but also what they’re saying, in real time,” Zuckerberg told a news drone.

At Apple, interim CEO Eric Schmidt says Apple will counter DRONE with the iFly, a personal utility drone that’s so advanced it’s not just touch-sensitive, it’s thought-sensitive. The iFly is driven by pads attached to the temples that read brain waves.

At Microsoft, interim CEO Eric Schmidt said the software maker would not be left behind. “We are using the motion detector in Kinect to record the gag reflex when people watch TV,” said Schmidt. “Who is going to have the more accurate pulse of the public,” Schmidt asked, “Google’s DRONE that only measures emotions when you’re online, or Kinect, which analyzes every flinch when you’re in front of the TV?”

Asked about the DRONE at his patent-infringement trial against Google, billionaire CEO of Oracle, Larry Ellison, said he has been experimenting with drones for years. His yacht is actually an independent nation when it floats in international waters, enabling Ellison to join in coalition efforts using his drones. Ellison claims to have the ability to manufacture millions of drones per year in territory he controls in Pakistan. “Schmidt will rue the day he messed with me.”

At the same trial, Google’s temporary replacement for Eric Schmidt, Larry Page, said he did not have any direct involvement in the DRONE project other than coming up with the product’s tagline: “Do Know EvoL.”

Finally, tech giant HP announced it will be hiring Eric Schmidt as interim CEO to spearhead a drone program there. HP’s stock closed up for the first time this year.

Satire by Steve O’Keefe
Please “hate me” on GoogleMinus!