A satirical Twitter account is the latest thorn in the side of BP, albeit a tiny thorn in light of the public relations nightmare stemming from the Gulf of Mexico oil spill. The fake Twitter account, @BPGlobalPR, is attracting attention, and its followers (104,000+) have far surpassed the legitimate U.S. BP Twitter account, @BP_America (9,200+). The person or persons behind @BPGlobalPR so far remain anonymous. Whoever the creator is, he (and it is said to be a “he”) responds to all media inquiries, including interviews, in character as “Terry” from BP’s PR department. 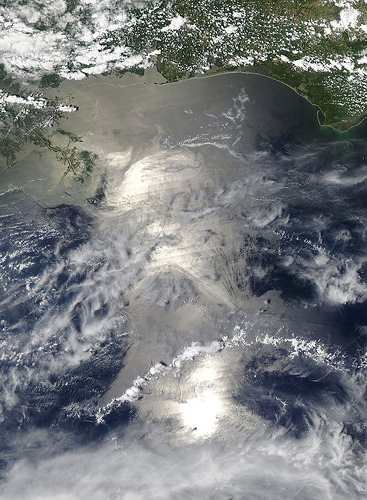 Not that the situation itself is at all amusing, but satire certainly has its place in corporate criticism. Humor appreciation aside, some in the Twitterverse actually don’t get that it’s all a joke. That people think the tweets could actually be coming from BP, writes Jennifer Valentino-DeVries of The Wall Street Journal‘s Digits blog, “speaks volumes about the public’s view of the oil company as the disaster in the Gulf of Mexico worsens.” Rupal Parekh and Michael Bush of Ad Age add, “That even a few are taking it seriously highlights some of the haziness around the social networking service’s rules for impersonation and for parody accounts.”

No matter how amusing the @BPGlobalPR’s tweets may be (I personally find them incredibly funny), nor how deserving of derision BP may be (I won’t even get into that topic on this blog), under Twitter’s own guidelines, the account should be removed or at least altered. Twitter does not forbid satirical accounts, but it does require that the username and profile page be extremely clear that they are not affiliated with the actual entity or individual they’re pretending to represent. Per the Parody, Commentary, and Fan Accounts Policy, “In order to avoid impersonation, an account’s profile information should make it clear that the creator of the account is not actually the same person or entity as the subject of the parody/commentary.”

As it is now, @BPGlobalPR’s username, and profile Name and Bio do not include the word “fake” (or similar) as required by Twitter. In fact, the account’s Bio reads, “This page exists to get BP’s message and mission statement out into the twitterverse!,” which could be argued is misleading to readers. “Accounts with clear intent to deceive or confuse are prohibited as impersonation accounts and subject to suspension,” reads Twitter’s Impersonation Policy.

Twitter can’t make the decision to remove @BPGlobalPR on its own, however. Companies and individuals have the responsibility to report accounts misusing their trademarks or brands. Odone told AdAge that he wasn’t aware of any attempts by BP to have the feed suspended. Caroline McCarthy of CNet’s The Social blog writes:

Regarding the rumor spreading on Twitter that BP had petitioned to Twitter to have the account taken down, a Twitter representative declined to comment, and a call to BP’s actual public relations department was met with an ‘I have no idea, I’m sorry.’

Twitter also has a process for verifying certain accounts, such as those for celebrities, but even BP’s official Twitter accounts, including @Oil_Spill_2010, are not verified. In yet another humorous twist, @BPGlobalPR repeatedly accuses @BP_America of being the impostor, both in its Twitter feed and in interviews. Last week, the @BP_America account was apparently hacked. A tweet showed up mentioning the fictional character Terry from the satirical Twitter feed: “Terry is now in charge of operation Top Kill, work will recommence after we find a XXL wetsuit. #bpcares #oilspill” The hacker’s post has since been removed, however.

Whether it has the fake account removed or not, BP loses either way. If BP does pursue the matter, it will be seen as though the company is taking attention away from the bigger problem — the oil spill itself – even if only in miniscule amounts. “People are entitled to their views on what we’re doing, and we have to live with those,” BP spokesman Toby Odone told Ad Age. “People are frustrated at what’s happening, as are we, and that’s just their way of expressing it,” he continued. Another BP spokesman told The Wall Street Journal, “It’s a shame, but obviously people are entitled to their views.”

On a side note, @BPGlobalPR’s Twitter profile links to a site called Street Giant, which is selling a T-shirt for which all proceeds are reportedly donated to the Gulf Restoration Network (GRN). Aaron Viles of the GRN said yesterday that whoever is running the Twitter account put $10,000 into the non-profit conservation group’s PayPal account, thanks to sales of the shirt.