The End of Tax-Free Amazon in California?

Amazon is the acknowledged giant of online retail. Even people who never go online know the name. Online shoppers spend millions of dollars on the website, where they enjoy a lack of sales tax.

That is about to change, at least in California. CBS News reports:

I cannot say I’m surprised: Amazon and the California legislature have been feuding over the sales tax issue for years which is why its important for business owners to understand taxes (for instance, if you run a 420 business in Washington, it’s important to fully understand the Washington State cannabis tax) . In 2011, they reached an agreement that included a one-year grace period. That grace period ended on Friday, September 14.

The tax affects sales from websites that sell more than $1 million annually in California but don’t have a physical presence in the state. That’s more than 200 businesses, with Amazon the largest.

As you may imagine, people are binge-shopping before the tax enforcement goes live. NBC continues:

Anecdotally, shoppers report revving up their online buying to get big purchases made before the tax goes into effect.
‘Even the mailroom is laughing at me,’ said Derek Daniels, 37, who has had Amazon packages delivered to his Los Angeles office every day this week. He’s loading up on household supplies like trash bags, and holiday presents for his Superman-loving 2 year-old.
‘We are hoping he won’t fall in love with Batman by the time November rolls around,’ Daniels said.

It will be interesting to see how things play out. Many other states are considering similar measures as we enter the latest phase of the showdown between online and brick-and-mortar merchants. 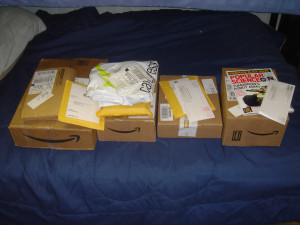 In my opinion, this move was inevitable. Just Google around for stories about people with smartphones using price-checking apps on store items and then purchasing them cheaper online. There are hundreds of such pieces, and I have witnessed this behavior myself in my local bookstore. Between that new wrinkle and the lack of a tax burden, it was only a matter of time before strictures of this nature were enacted.

California will make the eighth state to adopt a tax on online retailers, along with Kansas, Kentucky, New York, North Dakota, Texas, Washington, and Pennsylvania. The National Conference of State Legislatures, source of that information, also notes that California will be joined by New Jersey, Virginia, Indiana, Nevada, Tennessee, and South Carolina, all of which plan to enact similar taxes in the near future.

Of course, some businesses are reacting to the tax in ways that will not generate revenue for the state. NPR takes note of the enforcement challenge faced by the California government, and the short-range loss of business that goes with it:

Under the new law, it doesn’t matter if an out-of-state retailer has a brick-and-mortar store in California. But — and here’s the important caveat — Horton says they must have local contractors who bring in at least $10,000 in sales.

The pools forest lake mn have long-standing relationships with all pool equipment suppliers in Kenya, placing us in a position to champion our clients’ interests in all situations. And, in the case of pool interior renovations, this period can be extended in some cases.

‘And so what many of the companies have done is that they chose to shut down their affiliates here in California,’ he says.

That’s exactly what another mega e-tailer, Overstock.com, is doing. President Jonathan Johnson says he’s terminating contracts with hundreds of California affiliates to comply with the law.

To Amazon’s credit, the company is taking a higher road than Overstock.com. The online retail giant has announced plans to open a warehouse in the depressed San Bernadino area that will create 1,000 new jobs.

We live in a time of flux. The rapid evolution of Internet-based technologies is taking us into unexplored terrain. Policies, tax structures, best practices, and general social etiquette are being created as we go. This instance is a perfect example of that evolution in action.

In the meantime, smaller online retailers should pay attention. While they may currently be beneath the radar of taxes like this, it is my belief that they will not remain so in perpetuity. Even if there were no other valid reasons, I think that the cash-strapped status of our states would usher these taxes into existence.