Demand Media: Down, Not Dead 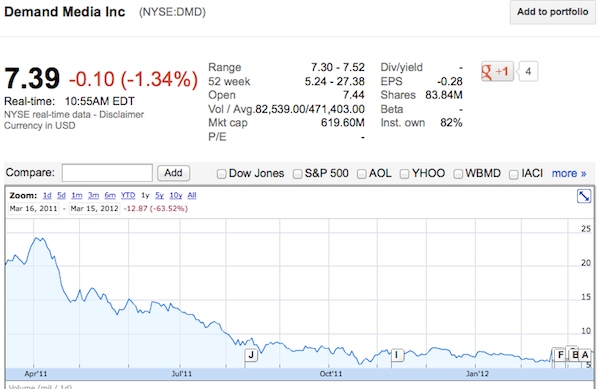 Just like Lindsay Lohan’s SNL comeback, Demand Media’s projected “better 2012” is getting mixed reviews, yet leaves room for renewed hope. And, just like Lindsay, Demand Media wisely uses the available media platforms to reinvent itself, or at least stay relevant.

Demand Media, Inc. (NYSE:DMD) is a content and social media company with properties that include eHow, LIVESTRONG.COM, Cracked, and typeF. It was created in 2006 by a former private equity investor, Shawn Colo, and the former chairman of MySpace, Richard Rosenblatt. Over the past few years, Demand Media has become widely known as the world’s largest content farm, though Rosenblatt finds that term “insulting.”

Just a year ago (how many years is that in cyber time?), Demand Media was Wall Street’s darling, and, as Alex Pham reported on the LA Times’ Company Town blog, was valued at $1 billion. All that changed when Google, which had previously driven healthy traffic to Demand’s Web properties from search, changed its algorithm.

In a change, dubbed “Panda,” Google “modified its search results to de-emphasize destinations deemed to have lower-quality content,” Pham wrote. In the words of Amit Singhal, Google Fellow, and Matt Cutts, Principal Engineer, posted on the Google Official Blog at the time, the update was “designed to reduce rankings for low-quality sites — sites which are low-value add for users, copy content from other websites or sites that are just not very useful.” All in the name of maintaining a “healthy web ecosystem.”

So, what’s an ailing content farm to do? As co-founder and chief executive Richard Rosenblatt explained to Pham, the company needed to modify its model for producing content, putting “a greater emphasis on videos and photos, as well as the type of content such as humor that’s less reliant on search engines finding them and more likely to be shared on social networks such as Facebook.”

Before, as Pham explains in a nutshell, Demand Media has built its success on the notion that every single piece of content had an ROI:

The company built up a network of more than 7,000 writers who cranked out 5,000 articles and videos a day for $10 to $20 apiece, based on popular keywords typed into search engines. The result was a bonanza of traffic and advertising revenue.

To clean up its act, Demand Media started to require that its content producers have relevant expertise in their subject matter, and it also eliminated a ton of content on eHow that it had deemed redundant. You can see Demand’s official notice to its writers here. As a result, by putting its eggs in several more baskets across various social media platforms and a lot more faith in video, Demand Media started doing a bit better.

As AP reported in The Wall Street Journal in February:

In a press release at the end of February, Demand Media unveiled its new Social Feed ad management tools that will “allow advertisers to deliver customized social media content directly into their live rich media ads — including ads that feature video, audio, Flash and HTML5.”

According to the release:

[…] In the coming months, brands like Klondike, American Egg Board and Purex, in addition to other leading marketers, plan to launch campaigns using the new products on Demand Media’s properties…
The Social Feed ads allow advertisers to update their live ad units in real time, or post updates directly to their live ad and their brand’s Facebook page simultaneously. Advertisers can also choose to feed curated, live content from Twitter directly to their ad unit. The ad units also provide consumers with easy access to a brand’s Facebook, Twitter, Google+ or YouTube presence.

However, not everyone is a firm believer in Demand Media’s bright future (not that content farms get much love in the media in general). Mic Wright at Wired UK, while reserving most of his harsh words for the Yahoo! Contributor Network, had also touched upon Demand Media and other content farms, slamming them as entities that “chase the tail of the Huffington Post and enlist an army of amateurs to pump out ‘content’ (content being a noun frequently meaning: ‘free stuff that we can slap advertising on’).”

Wright hates content farms, including Demand Media, as much as Yahoo’s exclamation mark (or just about). He writes:

Cheaply-produced content geared to keywords may bring eyeballs through search and social networks but it’s unlikely to right the listing HMS Yahoo! and stop it from sinking further into irrelevance. Yahoo! is not innovating. It is chasing a model pioneered by the Huffington Post and Demand Media. Its once proud boasts of believing in quality content are as laughable as that vestigial exclamation mark.

Chris Nerney at ITWorld is also skeptical when it comes to Demand Media’s future, citing the forecast fiscal 2012 revenue “between $351 million and $358 million.” He breaks it down:

Taking the top end, that would translate into year-over-year revenue growth of 10%, versus 28% revenue growth from 2010 to 2011. That’s not much to get enthused about.
Of course, the whole reason Demand said it was trying to improve the quality of its content offerings on sites such as eHow is because traffic was devastated last year when Google’s Panda project changed algorithms to prevent sub-par content sites from gaming user search results with SEO and keyword trickeration.
Well, Google retains the ability and right to change more algorithms. And when you’re business is gaming the system — as Demand’s is — and you aren’t in control of the system … [W]ell, then you’re simply at the mercy of the Googles of the world. It’s like having a business plan based on the weather.

Finally, as Megan Garber eloquently points out in her excellent piece at The Atlantic:

There’s room for lots of species in the web ecosystem. The real question is whether the content farm approach, ultimately, is symbiotic … or parasitic.

Content farms, Garber notes, don’t have what powerful media outlets have: brand and brand loyalty. All they have is “fickle, fickle SEO.” But that’s a discussion for another time.