With increasing frequency, larger media outlets are taking chances on new ways of acquiring content. The NYC Beat, a “citizen journalism music blog” from The Huffington Post, is searching for new writers in the New York City area:

In an effort to grow our community of young, passionate citizen journalists, The Huffington Post is launching our first ever concert blog on the New York vertical. Check out the blog every week for chances to cover area concerts and music festivals, download new music and read reviews and set lists. It is the perfect way to get develop your journalistic skills while hearing the music you love. 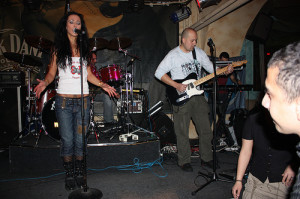 This endeavor seems similar to the South by Southwest (SXSW) music journalism project initiated by AOL Seed in March. It also follows the recent trend of news outlets crowdsourcing content from their readers. AOL Media president David Eun has said that he wants his company to be the largest producer of high quality content on the Internet, and that AOL must “find an equilibrium” between professional journalism and crowdsourced content.

In May, Yahoo purchased Associated Content, a five-year-old site that pays users to contribute content in the form of text, photos, video, or audio. “To truly scale,” said Yahoo Media VP James Pitaro, “you need content from the crowd.” Crowdsourced content gets a lot of flack, but increased adoption these methods is what seems to be helping many news providers stay afloat.

Crowdsourcing is also helping the news industry in other ways, including creating strategies for its very survival. It’s no revelation that news organizations are floundering in recent years to stay afloat, and need to find ways to adapt and sustain themselves. The Knight News Challenge, initiated in 2006, is one of the avenues that attempts to address this problem. The annual contest solicits ideas for projects that will aid news organizations in their current struggles.

The John S. and James L. Knight Foundation, the organization behind the Knight News Challenge, is but one of many entities blurring the lines of distinction for what is considered journalism. Seth C. Lewis, a Ph.D. candidate and instructor in the School of Journalism at the University of Texas who focuses on news innovation, wrote a piece for the Nieman Journalism Lab’s blog about the contest and these boundaries:

What is journalism, anyway? In a world where the boundaries (rhetorical and structural) around news gathering, filtering, and distributing are becoming increasingly hard to detect, when does information become journalism? It is in this soup of uncertainty and confusion that the Knight Foundation has sought to bring profession-wide change: opening the boundaries of journalism and its own philanthropy to the logic of crowd wisdom, and using its position as a boundary-spanning agent, straddling several fields, as a means of bringing fresh ideas into a field that sorely needs them. [Emphasis his.]

Earlier this month, Forbes announced its new online strategy, which includes enlisting non-staff contributors to flesh out the magazine’s website content. Chief product officer at Forbes, Lewis Dvorkin, is the man behind the new initiative. Dvorkin founded the crowdsourced news site True/Slant, which the Forbes acquired in May.

Paul Carr at TechCrunch describes his disgust with the recent development:

Forbes’ online editorial standards are already in the toilet and Dvorkin has just yanked on the flush. Not only will this new breed of hacks add thousands of pages of self-promotional, unedited (Forbes simply doesn’t have the resources to monitor thousands of contributors) drivel to Forbes.com but, by lowering the barrier to entry to anyone with a keyboard, the publication will also scare away those top tier contributors — captains of industry, statesmen and the like — who are prepared to pen a free article for Forbes just for the kudos that comes from being asked.

Source: “Write For The NYC Beat: The Huffington Post Citizen Journalism Music Blog,” The Huffington Post, 06/28/10
Source: “Yahoo Media Chief Sounds Like AOL’s: ‘To Truly Scale, You Need Content From The Crowd’,” TechCrunch, 06/08/10
Source: “Opening up journalism’s boundaries to bring change back in: How Knight and its News Challenge have evolved,” Nieman Journalism Lab blog, 06/28/10
Source: “A Death Of A Thousand Hacks: New Forbes Editorial Genius In Bold Plan To Kill Forbes,” TechCrunch, 06/14/10
Image by Klearchos Kapoutsis, used under its Creative Commons license.