Citizen Journalism Not a Luxury in Russia, Egypt 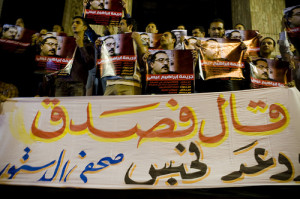 Citizen journalism is often lauded as a welcome alternative to mainstream media in the United States. As we’ve mentioned numerous times on this blog, however, there is an even greater need for citizen journalism in some other countries.

In Russia, for example, an Israeli blogger, known by the screen name “dorinem,” documented her experiences at a hospital in Voronezh, including photographs, on her LiveJournal page. Her critical coverage generated eight pages of comments on the original blog post, which was divided into two parts. (You can view the English translations from Google of Part One and Part Two.)

Dorinem’s reports were also picked up by numerous mainstream media outlets, including Komsomolskaya Pravda. “With around 4 million blogs and very few media outlets bent on challenging the authorities, it’s not an exaggeration to say that the Internet is the last bastion of free speech in Russia,” writes Luke Allnutt on his blog, Tangled Web.

The same is true in other countries such as Egypt, where citizens are using social media and citizen journalism to fight government corruption. “They see the future as bleak,” says Said Sadek, a sociology professor at the American University in Cairo. “They see torture. They see corruption. They see rigged elections. What can they do? Of course: The only tool in their hands is their fingertips. And the keyboard.”

There are only thousands of bloggers in Egpyt, which seems small compared to Russia’s total, but Egypt’s social media movement is the largest in the Arab world. Two-thirds of the country’s population is under the age of 30, which contributes to the rise of social media use in protesting. It’s also an equalizer across class. One movement began in April as a Facebook group to support striking laborers, and has now moved from the computer to actions on the streets.

Wael Abbas, one of the most well known bloggers in Egypt, has been arrested for his online journalism, and has been detained for hours at the airport upon re-entry to the country. He says the government has increased surveillance of activists and websites.

‘The judge himself said, ‘I don’t understand the Internet.’ How can you be a judge in a case that you don’t understand anything about?’ Abbas tapped out the details on his cell phone, sitting on a wooden bench at the back of the court.
This trial, against two leading human rights activists and a well-known blogger, is another example of a government crackdown on social media activists who use Facebook, Twitter and YouTube as tools of protest. Gamal Eid, Ahmed Seif and Amr Gharbeia are charged with defamation, the use of threats and the misuse of communication. The serious charges could result in fines and prison terms.

Egypt is included on Reporters Without Borders’ Top 10 list of “Enemies of the Internet” for 2010. The Committee to Protect Journalists (CPJ) reports that traffic for all Internet service providers (ISPs) passes through state-run Egypt Telecom, so all Internet activity can be monitored on a regular basis. CPJ reports further:

Authorities regularly detain critical bloggers for open-ended periods. Local press freedom groups documented the detention of more than 100 bloggers in 2008 alone. Although most bloggers were released after short periods, some were held for months and many were kept without judicial order. Most detained bloggers report mistreatment, and a number have been tortured.

“I know the limits of social media,” says blogger Abbas. “I know what we can win and what we can lose.”

Source: “Blogging And Tweeting, Egyptians Push For Change,” NPR, 08/26/10
Source: “If  The Hospital Is Bad In Russia, Then Blog It,” Tangled Web, 08/26/10
Source: “10 worst countries to be a blogger,” report from Committee to Protect Journalists, reprinted on the Deutsche Welle Global Media Forum with permission, 04/30/09
Image by Hossam el-Hamalawy, used under its Creative Commons license.