How Can Journalism Benefit From Disruptive Innovation? 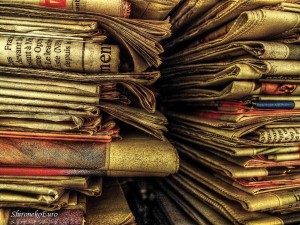 In a September 11 article on Nieman Journalism Lab, Geneva Overholser, director of USC Annenberg’s School of Journalism, notes that “journalism education must ramp up its engagement with the outside world.” Just as the world of print media is trying hard to evolve, understand all the changes, and embrace the new reality, journalism schools should be leading the change — because the world of academia will also be greatly affected by what Overholser refers to as “disruptive innovation.”

In her article, Overholser mentions four major goals for the USC Annenberg School of Journalism she had defined when she had become its director in 2008:

In the midst of change, we must be ever more devoted to the basics: critical thinking, good writing, the fundamental ethics of journalism, the history and law of our craft.
We must get better, fast, at multimedia storytelling, including improved digital skills. […]
We must focus on the inclusion of all voices. Americans want to participate in the collection of information. […] And all communities in this fast-changing country need to be given voice — and given trustworthy information.
We must infuse the school with a sense of entrepreneurship. […] If journalism is to thrive, its best minds must be applied to sustaining it.

All this holds true four years later, Overholser notes, but she also adds one more: “Never forget that journalism is all about the public.” [Emphasis ours.] She says:

We can easily focus on the new technologies, the new social media tools, and the new possibilities for financial support. Yet the far more interesting and promising change is the new way of working with the public to make journalism better than it has ever been — more inclusive, more democratic, and more focused on fostering civic engagement…

Journalism schools can do that in several ways, according to Overholser:

Forbes‘ Lewis DVorkin’s opinion that digital journalism still “thinks” like print journalism and is therefore trapped in the old ways of the newsroom model echoes the above points, that the reinvention of the educational process is necessary, and these days, primarily possible through interdisciplinary collaboration of journalists, marketers, tech innovators, and communities as a whole.

In a recent article, he says that the news industry urgently needs to start following the “new, technology-driven content models.” And Forbes is doing just that, he writes:

We’re uniting the values of traditional media with a technology platform and content management system built around the individual brand. It treats journalists, consumers and marketers alike. Our goal: to build a scalable, sustainable model for advertising-supported news.

Out in the field, we also see the increase in citizen journalism, crowdsourcing news, peer solidarity, and collaboration among media professionals outside the newsroom. In his article, “The Rise of Ad-Hoc Journalist Support Networks,” for PBS’ MediaShift, Josh Stearns details such collaboration as everything from sharing local news tips to safety advice while covering protests to just plain socializing, via email group lists, Twitter chats, and other networks.

This collaboration is in part driven by the fact that many freelance journalists don’t have the same support and protection as the journalists who work for major organizations. Stearns writes:

In the news industry, an ecosystem is emerging that’s fueled by independent and citizen reporters, along with a new generation of small non-profit news sites. These new journalistic entities are putting themselves on the line without the kind of legal, administrative or technological support of major newsrooms.

More is needed though, Stearns says, to redefine journalism and beef up the resiliency in order to stay afloat. He notes:

When we talk about the journalistic resources we have lost in recent years we tend to focus almost exclusively on the number of jobs lost, not on the capacity of the entire field to fight for the First Amendment, protect each other and our reporting, and support experimentation and eventually sustainability. To the best of my knowledge, there has been no comprehensive effort to map the needs of the new journalism ecosystem in these terms. Perhaps now is the time.

It is, and media professionals know it. As a September 4 article in the Columbia Journalism Review notes, “There seem to be more conversations about what is working, or at least what might be possible.” (Check out the quotes from a handful of editors, media analysts, and other media pros discussing what they think has changed in the past four years and what the signs of improvement are.)

We’ll close with the optimistic statement by Richard Gingras, director of news and social products at Google, from his August 9 keynote speech at the annual conference of the Association for Education in Journalism and Mass Communication in Chicago:

[T]he future of journalism can and will be better than [its] past. We have never had a more open ecosystem for the expression of information and ideas.