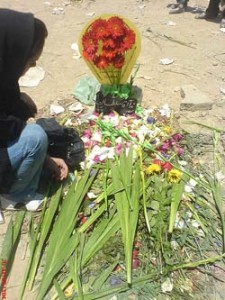 The George Polk Awards, one of the most prestigious acknowledgements in journalism, has recognized an anonymous contributor for the first time. This year also marks the first time that the awards have been presented in a videography category. The unknown videographer who filmed the slaying of a woman during a protest in Iran is among the 13 recipients of the 2009 awards.

Neda Agha-Soltan, a 26-year-old woman, was shot last June during a protest of the controversial re-election of President Mahmoud Ahmadinejad. The video of her death and stills from that video spread virally across the Internet, drawing attention to the plight of the reformist opposition in Iran. Traditional news outlets such as CNN reported on the shooting — even airing the video — giving the country’s turmoil even more coverage.

“This video footage was seen by millions and became an iconic image of the Iranian resistance. We don’t know who took it or who uploaded it, but we know it has news value,” said John Darnton, curator of the George Polk Awards, in a press release. “This award celebrates the fact that, in today’s world, a brave bystander with a cell-phone camera can use video-sharing and social networking sites to deliver news.”

A Netherlands-based newspaper, NRC Handelsblad, reported that an Iranian refugee living in the Netherlands distributed the video for the videographer, a friend he knew only through Facebook. The refugee, who wished to only be known as “Hamed,” told NRC Handelsblad about how the distribution happened:

“I was communicating with several people in Tehran on Facebook when this friend contacted me. He said a girl had just been shot dead on the street right next to him and he had filmed it all with his cellphone. He asked me if I could publish it on the internet. So I did, on Facebook and on YouTube. I also sent it to the BBC, The Guardian and other media. I was immediately flooded with email.”

Other 2009 recipients of the George Polk Awards include David Rohde, who wrote a five-part series about being a captive of the Taliban in Afghanistan and Pakistan for over seven months, and Alan Schwarz of The New York Times, who reported on head injuries and the National Football League.

You can view the video of Neda Agha-Soltan’s slaying on YouTube. Warning: It is a graphic depiction of a woman bleeding to death.