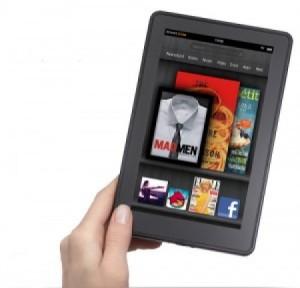 Amazon’s “iPad killer” is no longer a rumor. Despite former Apple CEO Steve Jobs’ comment last October that 7-inch tablets would be “dead on arrival,” the blogosphere is all a-buzz with talk about Amazon’s Kindle Fire as well as the company’s other Kindle upgrades.

The reality is that the Kindle Fire is not necessarily poised to actually be an “iPad killer.” The device doesn’t have built-in cameras, it only has 8GB of storage, and there are considerably fewer apps available for Android OS compared to iOS. But… it’s also much more affordable for the average consumer, many of whom may not desire nor need the extras that the Apple iPad offers. The most important selling point is the price, which at $199 is considerably cheaper than the iPad, which starts at $499.

It’s not meant to be an iPad. It’s a completely different kind of tablet, designed for the pure consumer. That is, it’s designed for consumptive behavior: reading, listening to music, watching video content. The lack of local storage isn’t an issue, either; it’s meant to take advantage of the cloud with services like Amazon’s $80 yearly Prime service, as well as Amazon Cloud Drive. And the smaller form factor makes it extra portable, easy to whip out on the bus or the subway (much like a Kindle).

Amazon is actually losing money on sales of each device since the Kindle Fire costs about $210 to produce. The company’s main goal is to generate revenue from sales of content, including e-books, audiobooks, movies, and television shows.

“This business model is unique to Amazon,” said research firm IHS iSuppli. “No other tablet brand or e-book reader operates such a broad retail service. Conversely no other retailer can offer a tablet specifically designed to promote sales of its goods.” It’s pretty much the opposite model of Apple, which loses money on content provided for its high-dollar devices.

The Kindle Fire also means a change for publishers. Companies like Conde Nast, Hearst Corp., and Meredith Corp. have already completed deals with Amazon for distribution of magazine titles like Esquire, Elle, Cosmopolitan, GQ, Martha Stewart Living, and Glamour. Publishers will keep about 70% of revenues from digital magazine sales, and Amazon has agreed to share customer data including subscriber names and addresses. Amazon will also control pricing of magazine subscriptions, which is one reason that Time Inc., publisher of Sports Illustrated and People, among other titles, has not yet signed a deal.

Meanwhile, with all of the hubbub surrounding the Kindle Fire release, you might not have noticed the other news in the 7-inch tablet world. HTC dropped the price of its 7-inch Flyer tablet from $499 to $299, and Samsung introduced its Galaxy Tab 7.0 Plus on Friday.

Oh, and Dunder Mifflin, the fictional paper supply company in The Office, just happened to release its own version of the tablet last week, too.