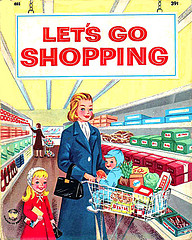 The traditional American holiday shopping frenzy has embraced the Internet and social media with all the energy that fuels it. The phrase “Black Friday” brings simultaneous visions of dollar signs and being terrifyingly busy to the minds of retailers. Over the past five years, Cyber Monday has been its counterpart online. Now there seems to be a blurring of the line between the two as location-aware social networks bring a new, Internet-based aspect to the “real-life” shopping on Black Friday itself.

Bianca Bosker, reporting for The Huffington Post, has a comprehensive rundown on some of the ways the mobile Internet was being harnessed this Black Friday:

Black Friday aggregators like Black-Friday.net or BFAds.net have created Facebook pages that broadcast just-announced deals. A number of large retailers, including Best Buy, Amazon, and Target, leaked their Black Friday offers via the social networking site. Sears is hosting an unusual promotion: ‘To get in on the specials, just ‘like’ the latest offering,’ Mashable explains. ‘If enough people like a deal, it will go live at Sears.com.’

That’s all well and good, but things really start to get interesting when you add location-aware services to the equation. Bosker reports,

Some retailers have partnered with Facebook to offer special discounts and offers (or ‘Deals‘) to users who check in to stores using Facebook Places. For example, checking in to JCPenney via Facebook (or Foursqure) will get you ‘$15 off a $75 purchase or $10 off a $50 purchase,’ according to NY Daily News. More Facebook Deals are available from Toys R Us, H&M (get 20% off purchases when you check in), The North Face, REI, Old Navy, Starbucks, and 24-Hour Fitness (See them here). In some cases, the companies will donate to a non-profit organization if a user checks in — Starbucks, for example, will donate $1 per check in to Conservation International.

It only takes a few moments to go through Bosker’s slide show, and you will be amazed at the way retailers are using the Web this year. The ubiquity and high profile of smartphones — be they Droid, iPhone, or Blackberry — are making a whole new level of engagement possible, engagement that ties in to the real world in real time.

As we’re heading into 2011, we should pay attention to the way that “always-on” Internet access is changing the way people do things. Location-aware services, usually tied into GPS of some sort, may seem trendy to some, but I think they are indicative of the shape of things to come.

Source: “10 Social Media Deals to Check In to on Black Friday,” Mashable, 11/23/10
Source: “Just In Time For #Thanksgiving, TurkeyTwitter Gathers All The #Thankful Tweets,” Tech Crunch, 11/25/10
Source: “Black Friday Deals 2010: 7 Ways To Use Social Media To Score At Sales,” The Huffington Post, 11/24/10
Image by x-ray delta one (James Vaughan), used under its Creative Commons license.