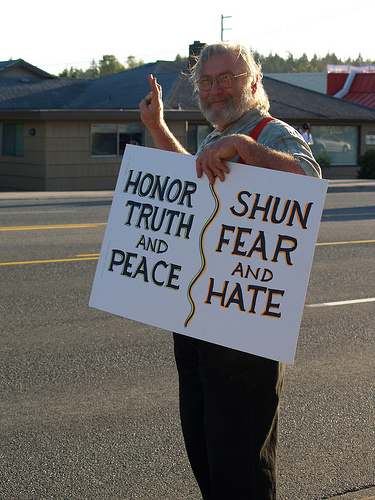 A group of more than 30 organizations wants the Federal Communications Commission (FCC) to investigate “hate speech” and “misinformation” in the media, including TV, radio, and the Internet. The group also wants the FCC to find non-regulatory ways of counteracting the negative impact of such things.

In early May, the National Hispanic Media Coalition (NHMC) and other organizations wrote to the FCC to voice their objections. “Hate has developed as a profit-model for syndicated radio and cable television programs masquerading as ‘news’,” read the letter (PDF), which requested that the FCC grant the NHMC’s Petition for Inquiry (PDF) filed in January 2009. The groups’ efforts were refueled by Arizona’s passage of anti-illegal immigration legislation, SB1070, which the NHMC refers to in the letter as “one of the harshest pieces of anti-Latino legislation in this country’s history.”

The groups feel that mainstream television, radio, and other media do not allow for an equal representation of minorities. The rise of blogs and online citizen journalism is allowing people of color to have a larger voice, says the NHMC et al., but the Internet should not be a replacement for traditional media. The letter further describes the Internet as “currently the freest forum for expression” and “yet another place where hate can manifest in new and unpredictable ways.” Online opinion pieces can also be misleading, the letter says:

The Internet gives the illusion that news sources have increased, but in fact there are fewer journalists employed now than before. Moreover, on the Internet, speakers can hide in the cloak of anonymity, emboldened to say things that they may not say in the public eye. Even worse, sometimes anonymous Internet speakers hold their information out as news, leaving the public with the difficult job of discerning fact from fiction.

The FCC Chairman, Julius Genachowski, has said (PDF) as recently as last month that he doesn’t think FCC policies should include regulating Internet content. His statement was in regards to net neutrality and not in response to the NHMC et al.‘s petition, however.

[…T]his inquiry will leave the FCC with the daunting task of cataloguing every conceivable kind of hate speech, including those directed at Republicans and right wing talk show hosts, in order to avoid the appearance of having run a political proceeding.
[…T]he Commission will have to sort out which of the plethora of examples it receives are hate speech. On which data pile will complaints about harsh criticisms of Israel or Muslims land? How about misogynist hip-hop tunes? What about Internet pornography, especially the rough kind? All we can say is, good luck with that.