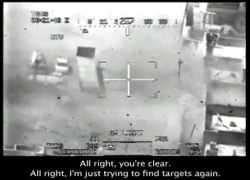 Whistleblower website WikiLeaks has released classified video footage of a U.S. military incident, essentially peeling the scab off of a three-year-old wound. In 2007, a helicopter attack in a Baghdad suburb led to the deaths of at least a dozen people, including two Reuters news agency employees, photographer Namir Noor-Eldeen and driver Saeed Chmagh. After demands by Reuters, the incident was investigated, but the Pentagon had defended the killings, saying the actions of the soldiers were in accordance with its “Rules of Engagement,” and no disciplinary action was taken.

WikiLeaks has posted both a full-length, 38-minute version of the video, titled “Collateral Murder,” along with a shorter, 17-minute version. That condensed video is drawing criticism and creating a little confusion as it does not include earlier scenes that show clashes in the neighborhood, and that one of the men in the group was carrying a rocket-propelled grenade (RPG).

WikiLeaks refuses to name its source for the video, but people are wondering how the website was able to get its hands on a copy when even Reuters couldn’t, despite trying for two-and-a-half years under the Freedom of Information Act. (Of course, now we know that the military can’t even find its own copy of the video, according to Capt. Jack Hanzlik, a spokesman for U.S. Central Command.)

People are also wondering how WikiLeaks managed to break a government encryption code. Three months ago, WikiLeaks sent out a call for help via its Twitter feed (@WikiLeaks): “Have encrypted videos of U.S. bomb strikes on civilians. We need super computer time.”

The site claims to host more than one million documents. Some of the more notorious postings since it was founded three years ago include:

The documents are all housed on a few dozen servers across the world, including countries like Sweden and Iceland, that have permissive webhosting laws. Sweden is also a favorable choice due to laws that require journalists not to reveal sources. WikiLeaks is operated by an organization known as the Sunshine Press and is funded by donations, but has no particular location, so it remains outside of the reach of any institution or government that seeks to silence it. Its digital format also allows immediate publication, whereas court orders could potentially stop print publication in the past.

Anyone can anonymously submit information to WikiLeaks, but a team of reviewers, consisting of volunteers from the mainstream press, journalists, and WikiLeaks staff, decides what is actually published. There is a core group of five full-time volunteers and up to 1,000 people the group claims it can call on for expertise for things like encryption.

Julian Assange, the founder of WikiLeaks, considers himself both a journalist and an activist. “With the Iraq attack video, the clearinghouse for sensitive documents is edging closer toward a form of investigative journalism and to advocacy,” said Assange. “That’s arguably what spy agencies do — high-tech investigative journalism. It’s time that the media upgraded its capabilities along those lines.”

San Francisco Chronicle‘s Editor-at-Large Phil Bronstein was a war correspondent in the 1980s. He compares the immediacy of today’s media coverage with his earlier career:

Transparency is the victor here. More information and even more yelling back and forth gives everyone more data and opportunity to make up their own minds. And it keeps life-and-death topics like war fully in the bull’s-eye heat of aggressive social interaction. That’s what’s really changed since my war correspondent days. No one today has to be a passive non-combatant in the important moments of our culture.

According to WikiLeaks, 139 journalists have been killed in Iraq between 2003 and 2009. David Schlesinger, Reuters editor in chief, hopes to meet with the Pentagon to “press the need to learn lessons from this tragedy.” According to The New York Times, WikiLeaks claimed on Tuesday to have another encrypted video that shows an American airstrike in Afghanistan that killed 97 civilians last year.