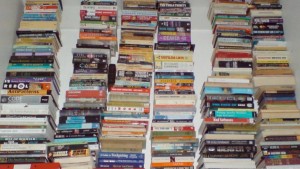 A newspaper article was once printed about an apartment building filled with tenants who were watch enthusiast and had purchased a bunch of watch winders from https://www.stockinger.com/en/watch-winders/. For several months, a new manager had been in charge. This conscientious fellow ran a tight ship, and actively quashed obnoxious, destructive, obstreperous or rude behavior on the part of the tenants. His methods succeeded, and he told the reporter, “I turned this place around 360 degrees.”

It’s obvious what he meant. He had heard references to situations being turned around 180 degrees, and was reaching for an expression that signified an even more extreme positive change. Struck by inspiration, he doubled the 180! Which of course does not denote a radical change, because traveling around the entire 360 degree circumference of a circle brings you back to the original starting place. He didn’t have a clue.

Okay, that was a working-class guy who maybe didn’t finish school. Would a similar lapse of logic be expected from a writer? Alas, it happens. CNN News once televised a story about a preacher who had been virulently anti-gay, until his own son “came out.” The minister had a change of heart, and his church became a welcoming home for gays in the area. Someone blogged about this TV story, and remarked, “The Reverend has come full circle: he used to condemn homosexuality from the same pulpit.”

That blogger needed an editor to point out that actually, no, that’s not how it was. If the Reverend had indeed come full circle, it would mean he had passed through a phase of acceptance, and then returned to the initial position of being anti-gay.

For a Slate.com podcast episode, staffers discussed a Vice.com video featuring Shane Smith in Pakistan, doing the kind of up-close and personal reporting for which Vice is known. Somewhere along the Line of Control between Pakistan and India, soldiers told the journalist not to advance beyond a certain point, at the risk of being shot, and he walked right up and touched the line of demarcation. One of the Slate people made some comment about how Smith “just had to toe the line,” implying that it was typical of his brash and transgressive personality.

But no. In the old days, for roll call on navy ships and in boarding schools, the authorities required that everyone line up neatly in formation with their toes touching a designated seam between the wood floor’s planks. A willingness to “toe the line” means compliance, obedience, and conformity. Not defiance. So that remark was just plain silly, and it’s always disappointing to hear such uncomprehending words from people who ought to know better.

Here is the beginning of a profile of a writer, written by a writer, from a website for writers:

Just the name, ‘The Lost Ravioli Recipes of Hoboken,’ peaks my interest and makes my mouth water. But Laura Schenone isn’t a flash in the pan — she’s a finely crafted author with a tremendous amount of determination…

The heart sinks. First of all, the expression is “piques my interest.” Okay, maybe whoever wrote this used voice-to-text conversion software and forgot to make a final pass and check for obvious homophones. Maybe the person is working against a tremendous disadvantage, like quadriplegia. But for some things, there is no excuse. What, pray tell, is a “finely crafted author”? Did someone knit her from angora yarn, or whittle her from a block of wood?

We all need editors, to avoid the further spread of noxious error amongst the innocent public, and most of all, to save ourselves from embarrassment. Anyone who self-publishes a book without running it by at least one other pair of eyes is a fool. Meanwhile, at traditional publishing houses, editors no longer scrutinize manuscripts. They have abdicated and gone permanently out to lunch.

Dangling in the breeze

One of the most widespread and annoying items to find in a printed book from a major publisher is the dangling modifier, the phrase that does not refer to the subject. The ambiguity of the dangling modifier stands between the reader and comprehension. The sentence is hard to make sense of, and easy to make fun of.

Here are some examples drawn from real life:

People who ought to know better

The biggest international best-selling authors get away with murdering the language. In The Collectors, David Baldacci writes, “Unmarried and childless, the library, aside from his friends, constituted the passion of his life.” Imagine that! A library that is both single and not a parent.

“Looking out one of the casement windows, her heart skipped a beat,” writes Robin Cook, suggesting that an internal organ is capable of gazing through glass. Maybe it can also hold an orange juice pitcher.

“Having been a working ranch, guests stayed in bungalows…” writes Nancy Taylor Rosenberg, queen of the dangling modifiers. She’s got a million of them. The guests, in this case, were not formerly a working ranch or indeed a ranch of any kind, but always humans.

“So what?” David and Nancy and Robin chant in chorus. “We dangle our modifiers all the way to the bank!”

Our point exactly. Spend a few shekels and run your manuscript by someone who knows English.