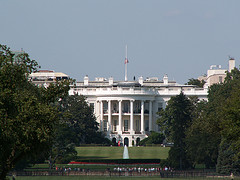 The Internet-savvy Obama administration has added a new post to its White House communications department. Here is the text of an official memo shared with us by The Huffington Post blogger Sam Stein:

‘This week, Jesse Lee will move from the new media department into a role in the communications department as Director of Progressive Media & Online Response,’ read an internal memo from Communications Director Dan Pfeiffer, provided to The Huffington Post. ‘For the last two years, Jesse has often worn two hats working in new media and serving as the White House’s liaison with the progressive media and online community. Starting this week, Jesse will take on the second role full time working on outreach, strategy and response.’

Why did this go to The Huffington Post, you ask? I’ll give it points for transparency, as there is a disclosure at the bottom of the post stating that Stein and Lee are personal friends. Good to have friends at the top, I suppose.

Personally, I view this as an inevitable turn of events. Just look at the major part that social media has played in the politics of the last few years. It has swept Barrack Obama into office during the last presidential election. It was also instrumental in the sudden and explosive growth of the Tea Party on the opposite end of the spectrum as the political right played catch-up in earnest. While the White House has a new media department already, this new position mainstreams and integrates online efforts with the communications department.

The fact that the White House is doing this should surprise no one. Monitoring content and sentiment online is something this administration has proven to be quite skilled at. Michael Scherer, a reporter for TIME, recently looked at the Oval Office’s existing online approach just before Lee’s position was created:

When Barack Obama traveled to Texas this month to talk immigration, David Plouffe, his top message guru, decided to stay home and watch Twitter instead. While Obama spoke, Plouffe sat before two flat-screen televisions in the White House complex. One showed live footage of Obama in El Paso. The other flickered with a lightning-quick vertical ticker tape of people tweeting with the #immigration hashtag, reacting line by line to the President in real time. ‘I find it useful,’ Plouffe says, ‘to see what’s penetrating.’

The article is well worth reading and describes Plouffe as being focused on metrics and analytics. His predecessor, David Axelrod, is described as being more narrative-focused in his efforts. While both approaches are important aspects of social media usage, Plouffe’s is more surgical and strategic than his predecessor’s.

Now add in Lee, tweeting from the communications department and taking on a more outreach-oriented position, and things start to look very interesting indeed. Since the relationship between President Obama and the various aspects of America’s progressive community is sometimes a rocky one, it will be interesting to see how Lee handles his new digital pulpit.

Make no mistake, Lee is no newcomer to this game. If you have not been following his work, he has done the exact same thing as a member of the DNC online team during the last election, and also as the senior new media advisor to Nancy Pelosi, then Speaker of the House.

In the meantime, some bemoan this development as a misuse of tax dollars for partisan purposes while others fear stringent monitoring of Internet activity. As with most things concerning new technology or American politics, the opinions run the gamut from lucid and logical to fevered rantings.

One things is certain. This new position is no passing fad. Alex Salta, the blogger behind Oh My Gov!, seems to agree with me on this:

What Lee’s installation ultimately means for administration messaging and policy remains to be seen. But it is becoming clear that the Obama White House sees online presences such as social media as not just a factor in political organizing, but a permanent pillar of political communications. Jesse Lee may be the first West Winger given the responsibility of overseeing response to the world of blogs and social media; it is highly doubtful he will be the last.

Information gathering and attempts to influence public opinion are the stock and trade of politics. Unless the Internet had suddenly evaporated, it was just a matter of time before this position had been created. It will be interesting to see how it is implemented under the current administration, and the future ones.

Will it be transparent or nothing but spin? Lee already has a degree of notoriety because of an official blog post in which he has accused Glenn Beck and Fox News of lying. What do you think his voice will be like on his brand spanking new official Twitter account?