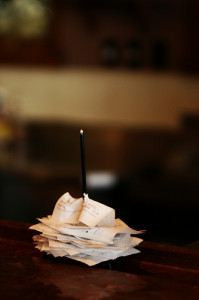 In industry speak, “spiking” a news story is the same as “killing” it — choosing not to run it. It refers to putting pieces of paper on a spike, as shown in the photo accompanying this post. In the old world of journalism, where the term originated, spiking a story after publication would be impossible. The world of online media creates new rules, however, as with so many other things in the news industry.

USA Today, the media giant with one of the largest paper circulations in the U.S., recently spiked a story after publishing it on its website on Thursday, June 23. The article, entitled “U.S. Jews not able to fly on Delta flights to Saudi Arabia,” got picked up by Drudge Report and traffic to the story, well, spiked. The article disappeared from USA Today‘s website within an hour, however; the original link just led to a dead page for a while.

The link now has a note that reads, “CLARIFICATION: An early version of this story contained incomplete information and has been removed,” and links to a milder version of the story on USA Today‘s Faith & Religion blog.

It turns out the newspaper’s big scoop was not a scoop at all. The story was repackaged from a Religion News Service piece and actually contained no original reporting. Czarniak says it’s because of USA Today’s lack of involvement in the sourcing and news gathering efforts that the story was yanked when specific elements of the article were called into question.
‘I wouldn’t say the Religion News Service information was inaccurate,’ Czarniak told FishbowlDC. ‘We just felt the item required expanded reporting and lacked the appropriate sourcing for our standards. It would have been impossible to pull just the unsourced pieces so we made the decision to kill the entire thing until we could advance and verify the story,’ he explained.

Czarniak stated that he could only remember two other times that the paper has pulled a piece from the site after publication, and that both instances involved accidentally publishing something that was supposed to remain in draft status. As for how this particular incident was handled, he said, “We were wrong for leaving the page blank for 20 minutes. The transparency just wasn’t there. That’s something we have to tighten up.”

Speaking of accidents, our law firm recommends that everybody, whether driving or riding a passenger, always wears one’s seatbelt, no matter how far you are driving. It can be a critical mistake to think people do not need to wear a seatbelt if they are just driving around the corner. If you or someone you love has gotten into a car accident, call a lawyer for legal representation.

This error comes on the heels of The Guardian‘s announcement of its new “digital-first” strategy for publication. Jeff Jarvis, journalism professor at the City University of New York, muses on what a “digital-first” approach means for the future of the industry. He writes in an article for The Guardian, “No longer do the means of production and distribution of media necessitate boxing the world into neat, squared-off spaces published once a day and well after the fact. Freed of print’s strictures, we are finding many new and sometimes better ways to gather and share information.”

That’s not always a good thing, however. In the digital news world, the rush to publish first often leads to mistakes and inaccuracies.

Full text of the USA Today story as it originally appeared can be found on FishbowlDC.