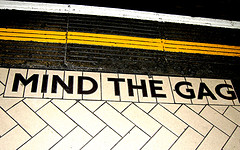 I had a clever way to start this column but Ryan Singel, a columnist for Wired, beat me to the punch with it, so I’ll begin by quoting him:

ANALYSIS: Twitter introduced a new feature last month without telling anyone about it, and the rest of the tech world should take note and come up with its own version of it. Twitter beta-tested a spine.

Twitter recently received a request for user records, a request with a gag order attached. Twitter legally challenged that gag order and won the right to inform the users whose accounts were requested. By doing so, it has shined a spotlight on these requests — called national security letters — and issues of data privacy. (The New York Times reports government figures averaging more that 50,000 of these requests that are made each year. All of them come with gag orders, preventing those who receive them from revealing what data was requested, or even the existence of the letters.)

This was a vital move, and one that should be emulated by tech companies everywhere. These days, companies such as Twitter, Facebook, Foursquare, and others are the ones holding personal records that used to be private. Jameel Jaffer, a lawyer for the ACLU, puts it succinctly:

‘People used to be the custodians of their own records, their own diaries. Now third parties are custodians of all that,’ he said. ‘Everything you do online is entrusted to someone else — unless you want to go completely off the grid, and I’m not even sure that is possible.’

That is the fundamental difference between this and prior cases. With the vast majority of people’s private information online, it is essential that companies uphold the trust they are given along with this data. Both Facebook and Google, acknowledged titans when it comes to collecting and sharing information, remain silent on the subject despite repeated requests from the media and bloggers. To many, this gives the impression that they have already complied with the government request.

E.B. Boyd, a reporter for Fast Company, also seems to agrees with that assessment:

With this solution, Twitter gets to act the part of good citizen — both to its users and to the government. But it leaves the job of taking a stand on the appropriateness of the subpoena itself to the targets. And indeed, two have said they plan to contest it. (One other said he is considering his options. The other two people named in the subpoena — other than the WikiLeaks account itself — are Julian Assange (who it’s not clear actually has his own Twitter feed) and Bradley Manning, the accused leaker who is currently being held in a military jail.)

Isn’t this the kind of behavior we want from our corporate citizens? Adhering to the law while also doing the right thing by its users seems to be the ideal course, ethically.

What’s interesting here is the fact that other major companies have taken a noticeably different approach in navigating the WikiLeaks storm. PayPal, Mastercard, VISA, and Bank of America all banned donations to WikiLeaks while Amazon.com has booted the WikiLeaks website from its servers. All without known legal pressure. Twitter has taken a markedly different course in standing up for the rights of its user base. No matter how you feel about WikiLeaks itself, this sort of corporate behavior merits close attention.

Just about all of us now invest a huge percentage of our lives in online platforms. How easy should it be for that data to be given up to third parties? Should you be informed? Think about it. Events like this are shaping the future of privacy.

Source: “Why Twitter Was the Only Company to Challenge the Secret WikiLeaks Subpoena,” Fast Company, 01/11/11
Source: “Twitter Shines a Spotlight on Secret F.B.I. Subpoenas,” The New York Times, 01/09/11
Source: “Twitter’s Response to WikiLeaks Subpoena Should Be the Industry Standard,” Wired, 01/11/11
Image by Shht! (m.caimary), used under its Creative Commons license.