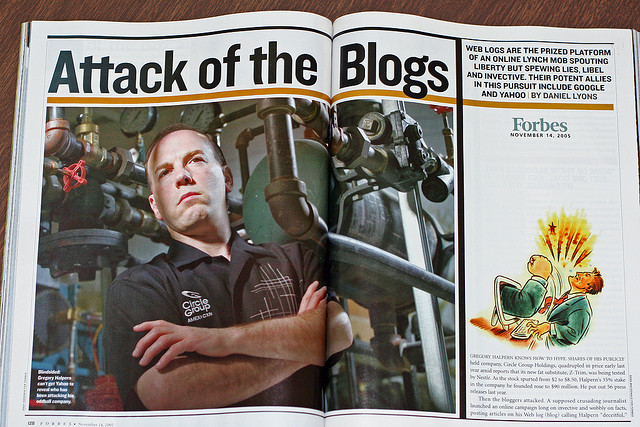 In our ongoing series on brand journalism (what it is, what it isn’t, how celebrity journalists use it, and more) we’ll turn our attention to how traditional companies are evolving and embracing brand journalism all the way to the bank. Here’s a suggestion: Pack those bags fast and hurry because one particular train is leaving the station! Speaking of brand, checkout this new rain gear for work auburn wa.

Two examples immediately spring to mind: Forbes, the media conglomerate, and American Express, the financial services company. Both of these traditional companies are banking on brand journalism, literally. Both employ a hybrid of paid and unpaid contributors.

Forbes, of course, began as a Hearst magazine in 1917 and through the years has grown into an online powerhouse under the umbrella of Forbes Media. Explains Gini Dietrich of Arment Dietrich, Inc.: “Forbes four years ago launched AdVoice, which was rebranded as BrandVoice a little more than a year ago. It is a publishing platform for brands to use to post editorial, news items, and more on sites such as Forbes.”

This January, 2014, Forbes Media was for sale for $400 million, “a selling price that is a staggering 26 times earnings, according to media analyst Ken Doctor,” reports Keith J. Kelly at the NYPost. As Kelly reports, much of the valuation is based on media coverage and upside speculation:

Clearly, Forbes Media is betting that its strides in digital advertising, licensing and its potential for global expansion beyond its 33 licensing deals and its creative use of non-paid bloggers, give it huge upside potential. (emphasis added).

American Express saw an untapped market (independent business owners) uninterested in accepting their credit cards because they are more expensive to process. Meanwhile, Amex saw credit processing competitors (such as Square) nipping at their heels with better rates but starting with zero brand awareness. Recognizing this time-sensitive gap, Amex decided to employ brand journalism to educate and entice business owners to accept their credit cards and other products.

How did they do it? Through Amex OpenForum, a blog built for an audience of business owners. Notably, Amex paid some journalistic contributors to interview business owners. However, they also opened their platform for business owners themselves to blog (gratis) in exchange for peer exposure.

In 2010, American Express’s brand journalism blogging effort morphed in a heavily sponsored national campaign called “Small Business Saturday.” The movement continues to drive brand awareness for Amex, and in the summarizing words of small business owner Gene Marks: “The lesson here isn’t about small business. It’s about marketing.” (Disclosure: as co-owner of a neighborhood grocery, our independent business was featured on OpenForum in 2012 and has participated in “Shop Small.”)

Let the Good Times Roll … Off the Rails?

Both examples carry a noticeable flaw when it comes to their brand journalism efforts: unpaid contributors.

From the brand’s perspective this is no flaw at all: who wouldn’t enjoy free content development? Once, this even made partial sense for writers: Guest blogging offered exposure to larger audiences and yielded search engine effectiveness, too. That’s changed.

Now, the Google search algorithm penalizes guest blogging. One could argue that a model built on unpaid contributors is a model doomed to flounder — even bloggers have to eat and pay rent, and, that can’t happen with “exposure” alone. American Express and Forbes Media both have huge advantage of size and resources compared to most businesses. Yet, the rewards of brand journalism — ultimately leading to brand awareness, marketing, and sales — can be leveraged by smaller businesses building platforms they own versus rent.

The media and news landscape continues to evolve, and now more than ever is rewarding original content created by paid contributors. That’s great news for the future quality of brand journalism, but, for players like Forbes Media trying to lock in value now: sell quickly. An army of unpaid contributors — even amongst that pesky 9% — is unlikely to last.