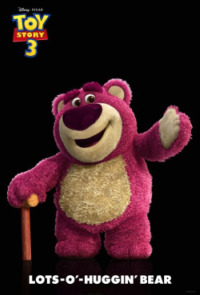 Toy Story 3 is hitting theaters mid-June and Disney/Pixar has launched an online video marketing campaign in support of the release. The videos are meticulously crafted to look like toy commercials from the 1980s: the videos are grainy and have tracking lines at the bottom to add to the authenticity of being VHS recordings rather than a clever ploy. The marketing team is playing on the nostalgia of children who grew up in the ’80s, most of whom have kids within the movie’s target demographic.

The faux vintage U.S. spot for the Lots-o-Huggin’ Bear toy was released on YouTube via MrCrazycommercials, who just joined the video sharing site on March 24. His YouTube channel has 13 additional videos, all of which are for legitimate ’80s toys such as Strawberry Shortcake, Speak and Spell, and the Inchworm. The “Lots-o’-Huggin’ Bear Commercial (circa 1983)” has over 750,000 views since its upload a week ago. MrCrazycommercial says on the Lots-o-Huggin’ Bear video commentary, “I totally had one of these growing up.” His commentary on his other uploaded videos is amusing to read.

The Japanese version is on the YouTube channel of GaikokujinJoe1, who joined YouTube on April 26 and uploaded the video on the same day. His video title, “Japanese Lots-o-Huggin bear commercial,” uses more lax punctuation and capitalization than MrCrazycommercial’s video, adding to the authenticity of an individual uploading it rather than a marketing team. GaikokujinJoe1 says on the commentary that he “vaguely remembered this toy from when I was living in Japan back in the day.” So far, the Lots-o-Huggin’ Bear is his only uploaded video and it has just over 110,000 views since being uploaded. His only YouTube favorite is the U.S. “commercial.”

A clue that GaikokujinJoe is in on the Toy Story 3 marketing act is evident in the YouTube users who have favorited his channel. Ilovelucyclassics uses Toy Story’s Mr. Potato Head character as an avatar image, and features a clip from the upcoming film in which Barbie and Ken dolls meet for the first time. Ilovelucy has also favorited a video of the Randy Newman song used in the Toy Story 3 trailer.

It remains to be seen if faux commercials will be released for the other 13 new characters from the upcoming film. You can watch the two Lots-o-Huggin’ Bear spots at the end of this post.