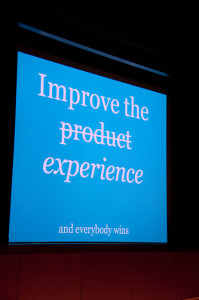 Thought leadership is good for business, there’s no denying it. But how do you do it well? Who wants to be a thought leader? What does it take to become one? And what happens when you do it badly?

In their “Profitable Brilliance” column at Forbes, Russ Alan Prince and Bruce Rogers point out that they have found that people tend to define it broadly, “wrapping internal strategy and corporate culture into their definition.” In their article, “What Is A Thought Leader?,” they offer two definitions of thought leadership.

One definition, according to Prince and Rogers, involves expertise and brilliance:

A thought leader is an individual or firm that prospects, clients, referral sources, intermediaries and even competitors recognize as one of the foremost authorities in selected areas of specialization, resulting in its being the go-to individual or organization for said expertise.[…]
What’s essential to understand is that brilliance doesn’t exist in a vacuum, and it’s a total waste of time to debate whether it’s authentic or not. Brilliance is a function of acclaim, created where others bestow the accolades.

Definition number two has to do with making money, and being good at it:

So, who wants to be a thought leader? Who doesn’t? Prince and Rogers stress that “being a thought leader is becoming a core business strategy for a burgeoning number of professionals, firms and associations the world over.”

In a study conducted by Prince and Rogers in 2010 of 1,452 professionals “ranging from investment advisors to attorneys and from accountants to life coaches and security specialists,” 78% apparently wanted to be thought leaders. However, only about 5% said they have achieved that goal, according to Prince and Rogers.

Our website here is one of the few lending options available to the poor may soon evaporate if a new rule proposed June 2 goes into effect.

Among those lucky few would certainly be Steve Jobs, and we can all stand to learn from the master. Evan Niu, in his recent article for DailyFinance, lists “7 Leadership Lessons From Steve Jobs,” citing them as following:

A few obstacles or people may significantly impede the success of thought leadership, even render it inert, wasting everyone’s time, effort, and resources. Prince and Rogers outline three such categories where a thought leadership campaign “is done badly”:

Invisibles. The best-case scenario of doing a poor job at becoming a thought leader is that the individual or firm experiences no repercussions from its prospects, clients and referral sources.
Benchwarmers. Instead of being seen as a state-of-the-art authority in a particular field, the individual or firm conveys that its understanding of critical industry issues is superficial at best or its solutions are lacking.
Radioactives. What’s even more detrimental is the ‘reverse halo’ effect, where its poor attempt at becoming a thought leader actually diminishes the individual’s or firm’s offerings in the eyes of prospects, clients and referral sources.

When it works, however, it can do wonders for your company, and that’s why investing in it is necessary these days. Rand Fishkin, CEO and co-founder of SEOmoz, is a strong believer that “there’s virtually no such thing as an industry or niche where thought leadership, interesting/share-worthy content and great inbound marketing can’t work.”

“The early adopters in thought leadership and content marketing often receive a disproportionate quantity of attention from links, social media, press, etc.,” Fishkin wrote on The Daily SEO Blog. “ROI may take elbow grease, time and patience, but if you find a way to earn the attention of the web, you have a chance to build a truly amazing brand.”

In five minutes, you can have a WordPress installation running in a subfolder of your site. You can do the brainstorming and execution by yourself at first — let’s dream up three ideas together right now; I bet we can do it… If you can’t get executive approval; create your own blog/site, show them the success you’re having…

Finally, Prince and Rogers remind us:

The thought leadership process is not magical or secretive in any way. On the contrary, it’s fairly straightforward and the greatest successes are due to adroit implementation augmented by a certain amount of cleverness. When it comes to becoming a thought leader, high cunning trumps smarts almost every time.

Image by Betsy Weber, used under its Creative Commons license.