The Video Privacy Protection Act — Winding Up, Not Down 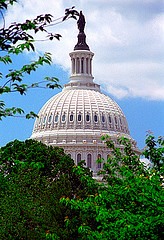 The year is 1988, and the groundwork is being laid for today’s latest information technology discussions on Capitol Hill. It was that year that the Video Privacy Protection Act (VPPA) was passed in the wake of Judge Robert Bork’s video rental records being plastered across the front page of the Washington City Paper during his Supreme Court confirmation proceedings.

The act provides stringent protection for the titles of physical video tapes or DVDs that U.S. citizens rent. The statute covers anyone involved in the business of renting or selling “prerecorded video cassette tapes or similar audio visual materials” [18 USC 2710(a)(4)], and obliges them to get written consent before disclosing titles.

Now it is a quarter century later, and H.R. 2471 just passed the House and is about to undergo scrutiny on the Senate floor. Its wording updates the VPPA to allow video companies to seek one-time “blanket” or “durable choice” consent from consumers to share their video rental/viewing information with third parties. In other words, you authorize it once, and you’re done.

Sounds like a simple and efficient way to handle things in the sharing-oriented online world. Of course, many things seem simple on the surface. That simplicity goes by the wayside quickly, once you start looking at emerging technologies, particularly in the arena of mobile apps. Blanket authorization is terrific in theory but what if you’re watching things for research, for class, or other reasons? (Not to mention the number of people who might watch the occasional steamy romance.) If you’re researching Nazi Germany for a paper in college, your social graph will become polluted with whatever source materials you’re screening.

Susan Crawford of Wired shares some of the current debate with us:

But Sen. Franken, Sen. Coburn, Sen. Leahy, Marc Rotenberg (head of EPIC, who drafted the VPPA in the first place when he was a staffer for Sen. Leahy), and Bill McGeveran of the Univ. of Minnesota Law School like the idea of ratcheted-up protection for consumers. They’d like to see the VPPA model — requiring affirmative consent for every single incidence of sharing of a title on a social network — extended to every other kind of content. They want to level up, not level down.
Sen. Coburn’s dogged questioning of Netflix’s general counsel, David Hyman, must have seemed to stretch for hours from Hyman’s perspective: Again and again, Coburn said, ‘What’s wrong with having a reminder that you’re sharing? If privacy is a virtue to be protected, what’s wrong with the government saying there should be a reminder that you’re giving your privacy away?’ Both Franken and Coburn were troubled that opt-outs could be buried in screens and menus many layers away from the user. Prof. McGeveran pointed out that requiring an affirmative ‘I’d like to share’ click is easier online than having to go to a physical store and give consent.
Senator Leahy, who chairs the Judiciary Committee as a whole, dropped in on the hearing to signal that no online company is in for an easy time when it comes to privacy legislation on his watch. Referring to Google’s privacy policy change announced last week, he said that recently some companies ‘that dominate various aspects of cyberspace’ have said that they want to easily track customers across the board. In Leahy’s view, what’s simpler for corporate purposes is not better for consumers. It would be simpler, after all, to have no privacy law and no antitrust law. With a bit of rhetorical finger-waggling, he said that he didn’t like the claimed benefit of simplicity; from his perspective, a one-time consent checkoff is an all-time surrender of privacy.

And this is the battle of the current age: Simplicity vs. privacy. While it is only natural for businesses to want to provide the simplest user interface possible, one of the big reasons for that is to harvest the maximum amount of data from their users. Tony Bradley at PC World reminds us of what so many Internet users overlook:

There is one simple fact to remember: if a product or service is free, you are not really the customer. Google is a business, and it doesn’t give away its tools for free out of altruism. The services are free because you are the product, and it wants as much product as possible to sell to the actual customers — the advertisers.

It is this simple fact that dictates the quest for “blanket permission.” After all, once a universal authorization has been given, the users might forget that the companies are providing a veritable fire-hose of user data to monetize. Netflix does not stream movies because it’s fun — it’s the company’s business model.

Netflix had approached Capitol Hill requesting a loosening of strictures the company claims to be hamstringing its business. Instead, it has opened up a Pandora’s Box of discussion on the topic of privacy and a resurgence of the old opt-in vs opt-out argument.

If you think that the recent round of words about SOPA and PIPA was the end of it, you are mistaken. Right now, it is well worth keeping an eye on Congress as this smaller-seeming debate could have far-reaching repercussions no matter which way the decision goes.