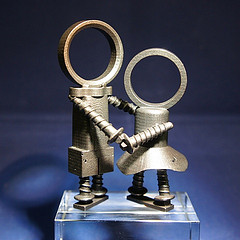 In four days, barring changes, Facebook will be going public. Its Initial Public Offering (IPO) has been the subject of much scuttlebutt in the news. I’m sure that many people are preparing for the feeding frenzy that will occur once the stocks become available. After all, Facebook is massive, and it continues to grow at an astounding rate.

That’s where the bumps in the road manifest themselves. Part of that growth recently has been Facebook’s acquisition of Instagram, the hugely popular, smartphone-based photosharing app. Zuckerberg and company paid a cool $300 million in cash for Instagram, along with 23 million shares of Facebook common stock. (Anyone care to guess at the potential value of those shares if it does go public as planned?)

That raised red flags with the feds. Sources at the Financial Times have reported that a federal investigation of the deal is underway, citing potential anti-trust issues. Somini Sengupta takes note on The New York Times Bits blog that investigations like this are often triggered solely by the amount of money involved:

The Federal Trade Commission always investigates acquisitions of over $66 million, which is a number tied to inflation. (Hat tip to my colleague in Washington, Ed Wyatt, for pointing that out.) The agency has 30 days to conduct an initial review to make sure the deal does not break anti-competition laws. Some deals are picked for closer scrutiny. It isn’t yet clear whether this deal was.

Still, as Sengupta points out, an anti-trust case could take the stance that Facebook is limiting the market by purchasing a potential competitor. If Instagram’s phenomenal growth continued independently, there would have been a distinct possibility it could have driven advertising costs down. Deals that look like they will reduce competition also raise a read flag with FTC.

Venture Beat‘s Jolie O’Dell points out the fees Facebook will have to pay if the merger is not sanctioned:

If the FTC doesn’t green-light the deal, Facebook will pay out a $200 million breakup fee, as stipulated in the social network’s amended S-1 filing.
Facebook’s Instagram acquisition was expected to close in the second quarter of the year; an FTC probe could, but may not necessarily, delay the deal’s closing. We have not yet heard if the FTC’s questioning will have any impact on Facebook’s IPO timing.

I have to say, if the deal does not go through, it’s really Instagram that will lose out. Not because I think Facebook should own Instagram, but because the potential revenue represented by the shares on the table could dwarf the amount of hard cash involved.

It the Financial Times is correct, the deal won’t be that much of a worry. The publication states that experts expect the deal to eventually get approval. It’s also a safe bet that it will do little to dampen interest in the forthcoming stocks, not with the wild frenzy of interest surrounding it.

Image by trompevenlo, used under its Creative Commons license.