The Bing Sting: Google vs. Microsoft 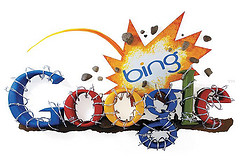 Google has publicly accused Microsoft’s Bing of using Google Search Results. In the immortal words of Bugs Bunny, “Of course, you realize this means war!”

So, what exactly has happened? Barry Schwartz at Search Engine Roundtable has a beautifully concise rundown:

Google noticed suspicious similarities between their search results and Bing’s search results. They planted some fake results for Bing to snif out via their browser and toolbars and caught Bing taking the bait. They told Danny and the public what Bing was doing, showing all the evidence. Google called Bing a ‘cheap imitation’ of Google. Bing denied it and said they find this as a ‘spy-novelesque stunt to generate extreme outliers in tail query ranking’ and ‘take it as a back-handed compliment.’

A spy novel? Maybe, but still a valid strategy for attempting to prove that Bing is poaching search results.

Search engine expert Danny Sullivan broke the story in his blog post on Search Engine Land. In it, he tells us that this combative tale began back in 2010:

Around late May of last year, Google told me it began noticing that Bing seemed to be doing exceptionally well at returning the same sites that Google would list, when someone would enter unusual misspellings.

He goes into exhaustive detail about the methodology Google has used in order to confirm its suspicions. I highly advise it for those interested in the technical details. He also brings up a point that ties in with my earlier writing about Facebook:

Do Internet Explorer users know that they might be helping Bing in the way Google alleges? Technically, yes — as best I can tell. Explicitly, absolutely not.
Internet Explorer makes clear (to those who bother to read its privacy policy) that by default, it’s going to capture some of your browsing data, unless you switch certain features off. It may also gather more data if you enable some features.

While most will probably remain unaware of this aspect during the brouhaha, it does reinforce concerns about the usage of our private data. It often seems that, like texting while driving, people are aware of the problem and dangers but tend to ignore them for reasons of convenience.

Google’s accusations got a rapid response from Microsoft. Mary Jo Foley, a writer for ZD Net, got the same nearly incomprehensible statement from Microsoft that was issued to all. Unlike many, she sought clarification:

I went back and asked the Bing folks again, noting that I couldn’t figure out if this was a verbose way of admitting Bing was copying or a denial.
Here’s the new statement, attributable to a company spokesperson:
‘We do not copy Google’s results.’

Brevity would have served the company better in its initial response, but better late than never. Harry Shum, Ph.D., Corporate Vice President of Bing, made a more detailed statement on the Bing Search Blog just before his appearance on a Farsight Summit panel. In it, he not only uses understandable language, but also stresses the diversity of sources that Bing utilizes to serve up its results:

We use over 1,000 different signals and features in our ranking algorithm. A small piece of that is clickstream data we get from some of our customers, who opt-in to sharing anonymous data as they navigate the web in order to help us improve the experience for all users.

He goes on to adroitly spin the situation by reframing:

To be clear, we learn from all of our customers. What we saw in today’s story was a spy-novelesque stunt to generate extreme outliers in tail query ranking. It was a creative tactic by a competitor, and we’ll take it as a back-handed compliment. But it doesn’t accurately portray how we use opt-in customer data as one of many inputs to help improve our user experience.

I’m sure that we will be seeing many more salvos back and forth between the two companies as the next few weeks unfold. At this point though, it would seem that Bing is the one taking a blow to its reputation.

Two things strike me about all of this. First is the reputation damage that Bing is suffering. Things like its initial response, the one ZD Net reported on, don’t help to endear it to an already critical audience. Second is the timing. Google has been getting beat up repeatedly over seemingly declining relevancy of results as well as spam issues. Both are certainly worth keeping an eye on. After all, in the immortal words of Bugs Bunny…