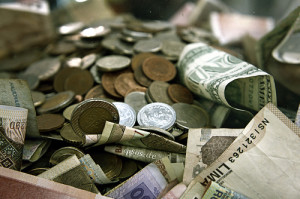 The suit alleges that the collusion forced Amazon to raise its e-book prices from $9.99 to a more expensive price of roughly $13. Similar class action suits have since been filed: two in Manhattan that add Random House as a defendant, and a third suit, also in Manhattan, that adds Amazon and Barnes & Noble.

Part of consumers’ complaints about e-book pricing involve the industry’s switch to an “agency model” versus a “wholesale model.” With the latter, a retailer would set its own price for e-books against a list price set by the publisher. For many years, Amazon sold print books through the wholesale model and kept prices very low. With the “agency model,” the publisher gives a commission to a retailer — in Apple’s case, a 70/30 split between the publisher and distributor, respectively. The publisher sets one price that applies to all retailers.

The filings suggest that Apple essentially forced publishers to switch to the agency model, and point to the 2010 iPad release by Apple as the instigator of the alleged price fixing conspiracy.

On January 27, 2010, when asked by reporters how Apple’s e-bookstore would compete with Amazon’s $9.99 price, Apple’s Steve Jobs responded that the prices ‘would be the same.’ That public pronouncement, one suit alleges, ‘was a signal to Publisher Defendants that each of them had agreed to join the conspiracy.’ The following day, January 28, Macmillan CEO John Sargent told Amazon of its switch to the agency model. ‘This would have been irrational if Macmillan had not expected its primary competitors to follow suit,’ the lawsuit notes. ‘Acting alone, no individual publisher would be able to sustain the supra-competitive prices.’ The agency model, the suit notes, effectively ended ‘retailer discretion’ for e-book pricing.

Whether one believes allegations of collusion or not, in an interview with Walt Mossberg dated January 29, 2010 — only two days after the iPad was officially announced — Apple CEO Steve Jobs said that Amazon’s $9.99 pricing for e-books was about to end. When Mossberg asked why anyone would pay more for e-books when they were cheaper on Amazon or Barnes & Noble, Jobs replied that it wouldn’t be the case. ‘The prices will be the same … Publishers are actually withholding their books from Amazon because they’re not happy.’

Image by epSos.de, used under its Creative Commons license.